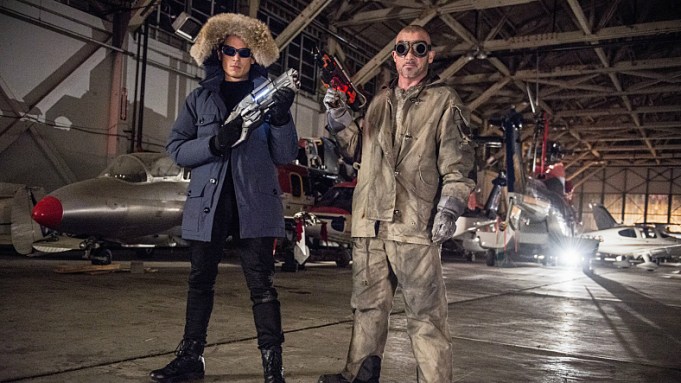 When “The Flash” returns from its winter break on Jan. 20, the CW drama wastes no time getting right back to the action, with Grant Gustin’s titular hero racing to improve his abilities in order to defeat the Man in the Yellow Suit — revealed to the audience in the midseason finale as none other than Barry’s STAR Labs mentor, Dr. Harrison Wells (Tom Cavanagh).

At the CW’s recent TCA Winter Press Tour presentation, the show’s producers and Cavanagh confirmed that Wells is indeed the villain known as Reverse Flash in DC Comics lore, but in a subsequent interview with Variety, Gustin cautioned, “That’s not necessarily the whole truth… There’s a lot more to it.”

The star added, “There are really still a lot of twists and turns with that. There’s still a big, big twist to come that caught me completely offguard when I heard about it.”

And that’s not even touching on producer Andrew Kreisberg’s cryptic promise that Rick Cosnett’s Eddie Thawne has a “connection to the Reverse Flash lore [that] is going to pay off big time in the back half of the year.” The plot thickens…

While the Reverse Flash is still a major concern, Barry has a more immediate threat to deal with: the return of Leonard Snart (aka Captain Cold, played by “Prison Break’s” Wentworth Miller) and his pyromaniac partner Mick Rory (aka Heat Wave, portrayed by Dominic Purcell), who are hellbent on destroying the Flash and making Central City their playground. (Check out an exclusive clip of the duo in action above.)

Miller and Purcell’s “Flash” appearance marks their first on-screen reunion since “Prison Break” went off the air in 2009.

“It was amazing being on set with them because they were so happy to be together and they just kept both saying, ‘Thank you so much; this is so much fun,'” said Kreisberg. “Snart is the cool, calm, collected one and Mick is the hothead. And in episode 16 we’ve got Snart’s sister, [played by] Peyton List. Just having Wentworth was amazing and then you add Dominic to it and it just gets bigger and then you add Peyton to it and it becomes a whole different thing.”

And if the Scarlet Speedster survives his run-in with the Rogues, there are plenty more bad guys on the horizon, according to Kreisberg: “We have Pied Piper played by Andy Mientus, who’s in two episodes, who’s great. We have Liam McIntyre as the Weather Wizard — continuing our strong run of stealing from ‘Spartacus.’ And Mark Hamill is the Trickster. It was an idea that we had early on. We’re actually going to have both the James Jesse Trickster and Axel Walker Trickster. So the episode is called ‘Tricksters.’ There’s a lot of callbacks to the old show… but it’s a [new] version of the character. Geoff Johns and I got to talk to Mark on the phone and he said he couldn’t believe his luck that his two favorite roles had come back to him this year. That made us really happy and we’re really excited about it.”

While the colorful villains are undeniably part of “The Flash’s” charm, the heart of the show lies in Barry’s relationships. Gustin teased that although things between Barry and Iris (Candice Patton) are strained after he revealed truth about his feelings for her in the midseason finale, “Barry is not as awkward as you would imagine him being moving forward after that… You would think after her rejecting him that now it would be really, really weird, but their relationship’s really important to him and it’s not like it’s the only thing in his life that he’s focusing on right now.”

He added, “Now that he knows the Reverse Flash is out there, he confirmed to Barry’s face that he is the one that killed Barry’s mom, so Barry knows that he hasn’t been chasing a ghost his whole life and this is real. He’s training for that. As far as their relationship, Barry’s just moving forward and Iris is really important to him. He hasn’t given up even a little bit. He is, for the time being, moving on and he is with somebody else in the near future. But the tables have kind of turned and Iris is the awkward one now between [them], because now she knows and maybe she’s kind of ignoring some feelings that she really does have, or doesn’t realize that she has. They’re actually in a pretty good place. Not immediately, but moving forward they’re in a pretty good place in the next couple episodes.”

The existence of the Reverse Flash will also serve as a catalyst for truth in Barry’s relationship with his father, Henry (John Wesley Shipp). “Their relationship is becoming more and more honest. One of the reasons I think the scenes between Barry and his father are so emotional and heavy right now is because Barry’s keeping such a big thing from him for his safety. It’s killing him that he hasn’t told his dad and he hasn’t told Iris. That will change in the near future between Barry and his father. Things will become more and more honest, which is I think a big weight off of Barry’s shoulders.”

Which villain are you most excited to see on “The Flash”? What’s the real truth behind Wells and the Reverse Flash? Share your theories below.