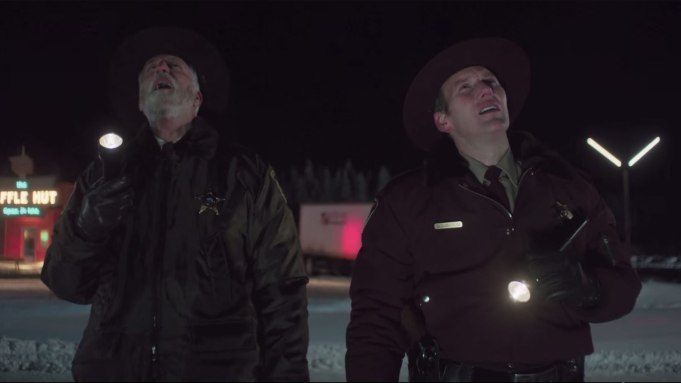 There’s no waffling about the first trailer for FX’s sophomore season of “Fargo”: This is a deal of a crime scene.

The new season of the miniseries is set in 1979 and follows Patrick Wilson and Ted Danson’s cops Lou Solverson and Hank Larsson as they begin to investigate what appears to be a murder at a diner named for the patterned breakfast food. Along the way, they’ll have encounters with a mustache-free and conspiracy-minded character played by Nick Offerman and a formidable foe in the form of a matriarch played by Jean Smart.

The sequence of events will eventually lead to Wilson’s character becoming the diner-owning Lou Solverson whom Keith Carradine portrayed in the miniseries’ first season.

“If you were paying attention in season one, you know we made a lot of references to Sioux Falls, and that was deliberate; that wasn’t an accident,” “Fargo” creator Noah Hawley said last summer at the Television Critics Assn. “So, what this next 10-hour movie is going to be is the story of Sioux Falls. The movie will take place in 1979 … with the story set mostly in Luverne, Minn., in Fargo and, of course, in Sioux Falls as well.”

The series is named for, and also loosely based on, Joel and Ethan Coen’s 1996 movie that starred William H. Macy and Steve Buscemi. Hawley said this season will have a different tone than the first as it pulls from different films in the Coen archives.

“If the three [Coen] movies that influenced season one were ‘Fargo,’ ‘No Country for Old Men’ and ‘A Serious Man,’ then this year we are in ‘Fargo,’ ‘Miller’s Crossing’ and ‘The Man Who Wasn’t There.’ Let the Internet speculation begin,” Hawley said last year.

“Fargo” returns in October on FX.