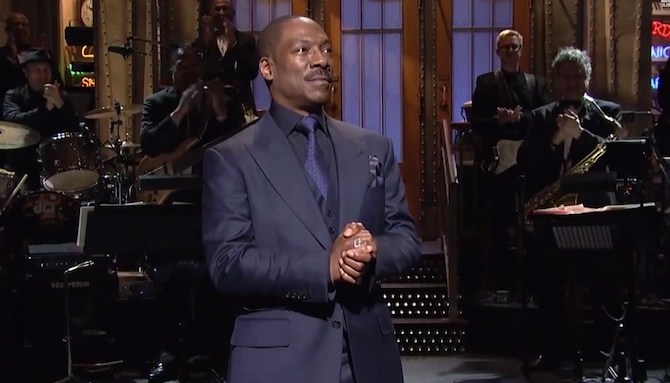 Eddie Murphy, who made a brief cameo on the NBC special, was approached to impersonate Bill Cosby in “Celebrity Jeopardy,” a skit Macdonald wrote and originally created for the show, but Murphy turned down the offer the night before the telecast.

“Among many other things, this show was to be the return of Eddie Murphy,” Macdonald wrote.

Macdonald went on to shower the “rock star” actor-comedian, now 53, with praise on Twitter for his immeasurable contribution to the NBC series in the early ’80s, when the lowly-rated “SNL” was nearly canceled.

“Eddie, the man who, in Lorne’s absence, kept the show alive. Singlehandedly…Every Saturday Night at 11:30 Eddie Murphy, a kid, would fill 90 minutes with comedy. Impossible.”

But his affiliation with the show would come to a standstill in the early ’90s when David Spade, during a segment on “Weekend Update” quipped, “Look children, a falling star,” as Murphy’s image was displayed in the background.

The actor-comedian was so upset by the joke, according to Macdonald, that he refused to attend the “SNL’s” 25th anniversary in 1999. He also turned down several hosting gigs.

“David is a very kind man,” said Macdonald, “but his remark was not.”

After more than 30 years, Murphy returned to the legendary halls of Studio 8H on Saturday night for rehearsal, to the surprise of “SNL” vets like Macdonald and Chris Rock.

“Rock says, ‘There he is. Like Ali in Zaire,'” Macdonald wrote.

As the A-list cast began to prep for Sunday’s primetime event, which drew over 23 million viewers, Macdonald pulled Murphy aside in a dressing room for an hour and tried to persuade him to do the “Celebrity Jeopardy” sketch.

“When it’s over, I’m convinced he’ll do it,” thought the comedian.

Adding to the “SNL 40” drama over the weekend was the fact that Bill Murray was golfing across the country.

To the relief of “SNL” creator Lorne Michaels, Murray eventually flew to New York to participate in sketches like his hilarious ode to “Jaws.”

Murphy, however, opted against the laughs.

According to Macdonald, he didn’t want to further shame Cosby–public enemy No. 1 on the Internet–who already faces a litany of sexual assault allegations for drugging and raping dozens of women.

“He knew the laughs would bring the house down,” Macdonald said of his decision. “(But) Eddie decides the laughs are not worth it. He will not kick a man when he is down.”

Wearing a blue suit, Murphy entertained the audience ever-so briefly after a warm introduction from Chris Rock, saying his “SNL” return was like “going back to my old high school, kind of.”

UPDATE: Cosby has subsequently thanked Murphy for his decision to decline the sketch.