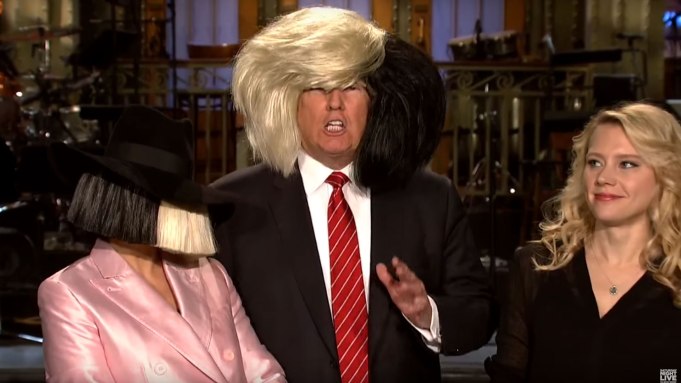 While these clips concentrate on the musician, there’s still time for the outspoken presidential candidate to loudly remind audiences who is hosting the show while also demonstrating his version of Sia’s infamous face-shielding hairstyle.

The videos are comparably calmer than the ones released earlier this week. Those featured Trump taunting the FCC’s equal time regulations while also allowing for himself and others to use his favorite new catchphrase: huge. The first batch of videos were also almost immediately pulled and re-uploaded online a few hours later in order to delete a segment where Trump called fellow Republican nominee Ben Carson a “complete and total loser.”

Given the outrage surrounding Trump’s appearance — most notably from Hispanic groups angered by Trump’s frequent comments about immigrants — it’s no wonder that the promos have already inspired parodies. “Funny or Die” recently released a video of comedian George Lopez as “Donaldo Trumpez” who is hosting a show called “Noche De Sabado En Vivo.” (That would be “Saturday Night Live” in Spanish).