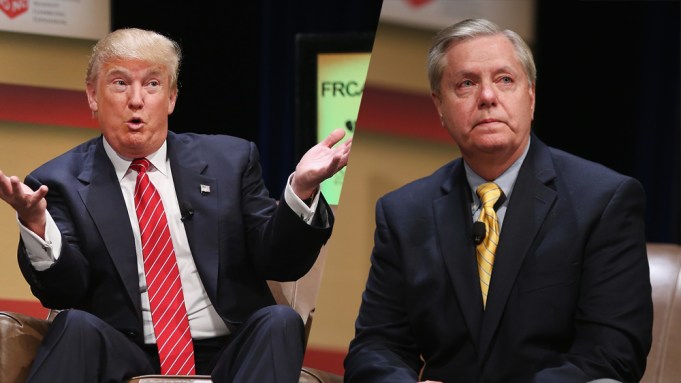 Donald Trump gave out Lindsey Graham’s personal cell phone number during a live televised campaign rally that aired on CNN and other networks, amid an ongoing feud with the senator of South Carolina.

“What a stiff!” Trump said of Graham on Tuesday in Bluffton, S.C.

“He doesn’t seem like a very bright guy,” Trump said. “He actually probably seems to me not as bright as Rick Perry. I think Rick Perry probably is smarter than Lindsey Graham.”

Trump then read a phone number aloud he claimed belonged to Graham.

“So, I don’t know, give it a shot,” he said, encouraging the crowd to call the number. “Your local politician; he won’t fix anything, but at least he’ll talk to you.”

Calls to the number go directly to voicemail, which has a recording of a woman’s voice stating the number belongs to Graham. Graham’s spokeswoman Brittany Bramell confirmed to Bloomberg that it was indeed the senator’s real number.

Graham said Tuesday on “CBS This Morning” that Trump should “stop being a jacka–,” referring to comments the presidential contender made about Senator John McCain on Saturday. “I like people who weren’t captured,” Trump said of McCain, a former naval pilot who was held as a prisoner of war in Vietnam for almost six years.