Continue to Variety SKIP AD
You will be redirected back to your article in seconds
Sep 11, 2015 4:44pm PT 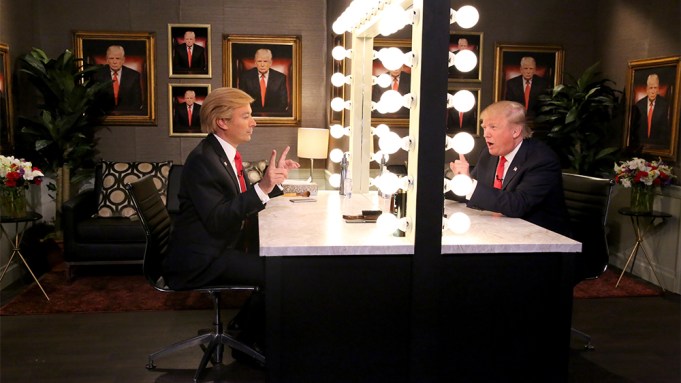 After taking swipes at any number of people vying against him for the Republican nomination in the race for U.S. President in 2016, Donald Trump made fun of someone unexpected: himself.

During Friday evening’s broadcast of NBC’s “The Tonight Show Starring Jimmy Fallon,” Trump took part in a sketch in which he portrayed the mirror image of a version of “himself” played by Fallon. The Fallon version of Trump proceeds to ask his mirror image all sorts of questions to prepare for the “Tonight” appearance.

“Me interviewing me – that’s a great idea,” Trump says to Fallon. A bottle of Lock It Weather Control Hairspray was placed on the dressing-room table in the scene.

In an interview segment, Trump was quick to cast aspersions on Hillary Clinton, who he said faces “tough stuff” in light of the current scrutiny she is receiving due to questions about how she handled emails while U.S. Secretary of State. He also echoed a sentiment he has made in the past that he was asked questions that were “a little bit, in my opinion, unfair” at the recent Republican debate hosted by Fox News Channel. He offered few details about how me might carry out policies, but said he was “an efficient guy” who had “the kind of mindset we need in this country.”

Fallon didn’t let the candidate off the hook, jokingly pushing back when Trump responded to a question with a group of non-sequiturs. “What the hell just happened?” Fallon asked his guest. He also asked Trump if his predilection for making off the cuff remarks might lead him astray. If Trump kept digging himself into holes, Fallon told him, “you might be President of China.” The appearance marks Trump’s first on a late-night program since announcing his candidacy.

His appearance comes as many of TV’s late-night programs are jockeying to win political candidates as guests. At CBS, Stephen Colbert’s new tenure on “The Late Show” is scheduled to include sit-downs with several notable politicians, including Trump, who will visit that program in about two weeks. Last night, Colbert won notice for an interview with U.S. Vice President Joe Biden that touched upon tragedies in both men’s lives.

In a question that Trump said he did not expect, Fallon asked him if he ever apologized for the many pointed remarks he tends to make. “I fully think apologizing is a great thing,” said Trump. “But you have to be wrong.”