Jimmy Kimmel on Childhood Hero: ‘David Letterman Was My Jesus’ 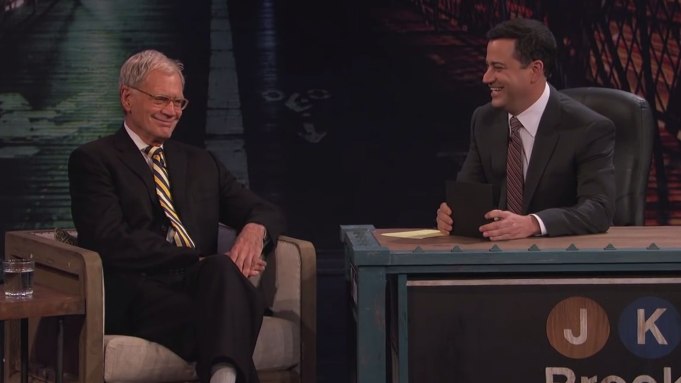 David Letterman has garnered millions of fans during his three decades on television, but only a few can say their admiration for the latenight host truly inspired their very own career. Jimmy Kimmel is one of them.

“David Letterman, growing up, was my Jesus to the point where it’s embarrassing,” Kimmel said at Variety‘s Actors on Actors Emmy Studio.

In discussion with Kerry Washington at Variety‘s studio, Kimmel fessed up to his obsession for Letterman, as he had his own dreams on bursting onto the latenight scene.

“You know, I had ‘L8NIGHT’ written on my my license plate. It was personalized,” he admitted, giving a nod to Letterman’s first latenight series, which premiered in 1982 on NBC and ran for 11 seasons before he famously left for CBS. Kimmel added, “I had a Letterman jacket … my 16th birthday cake said, you know, ‘Late Night With David Letterman’ with the cake.”

Washington, who was at the Actors on Actors studio to chat with Kimmel, asked him if Letterman is aware that he was his childhood role model.

“Yeah, he knows, he knows,” Kimmel joked, quickly re-phrasing, “I know it would really alarm him more than flatter him, so I keep that close.”

Letterman’s final episode of “Late Show” airs May 20 on CBS.