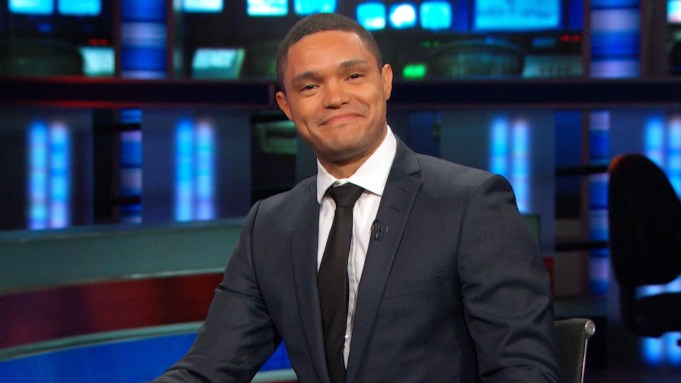 Comedy Central has set Sept. 28 as the start date for Trevor Noah as host of “The Daily Show,” taking over less than two months after Jon Stewart exits.

The 31-year-old comic from South Africa has been a recurring contributor to “The Daily Show” since late last year. Comedy Central announced in March that he would succeed Stewart as host of the latenight program.

Stewart’s final day as host of “The Daily Show” is Aug. 6.

September will be a busy month for new latenight hosts, as Noah’s bow on “The Daily Show” comes three weeks after Stephen Colbert, another Comedy Central alum, takes over as host of CBS’ “The Late Show.”

Soon after Comedy Central confirmed that Trevor Noah would replace Jon Stewart as the host of “The Daily Show,” the network encountered a social media backlash when old tweets from the 31-year-old comedian were brought to light that made him seem, among other things, racist, anti-Semitic and sexist.

Comedy Central has since asked that fans of the liberal “news” show judge the new host for more than what he says in 140 characters or less.

“Like many comedians, Trevor Noah pushes boundaries; he is provocative and spares no one, himself included,” the Viacom-owned network said in a statement. “To judge him or his comedy based on a handful of jokes is unfair. Trevor is a talented comedian with a bright future at Comedy Central.”

Examples of Noah’s tweets include one from 2011 where he wrote “A hot white woman with ass is like a unicorn. Even if you do see one, you’ll probably never get to ride it” and one from 2014 that said“Behind every successful Rap Billionaire is a double as a rich Jewish man #BeatsbyDreidel.” He also tweeted multiple comments about Asians, including one that read “I just saw an Asian chick so white she started dating black guys.”

Whitney Friedlander contributed to this report.