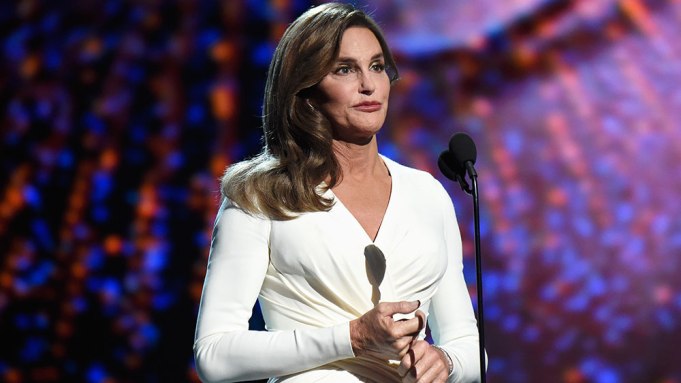 Caitlyn Jenner accepted her first formal award on Wednesday since announcing her transition, receiving the Arthur Ashe Courage Award at the ESPYS and giving an emotional speech in the process.

“The real truth is that before just a few months ago, I had never met anybody else who was trans,” she said. “Now as you saw, I dealt with my situation on my own, in private. It’s been eye-opening, inspiring, but also frightening.”

“With attention, comes responsibility. As a group, as athletes, how you conduct your lives, what you say, what you do, is absorbed and observed by millions of people, especially young people,” she told the room. “I know I’m clear with my responsibility.”

She went on to tout a simple goal: “Accepting people for who they are.”

Jenner also took time to thank her family, much of which was in attendance, and Diane Sawyer for giving her a platform to come out.

“Trans people deserve something vital,” she said. “They deserve your respect. And from that respect, comes a more compassionate community, a more empathetic society and a better world for all of us.”

“If you want to call me names, make jokes, doubt my intentions, go ahead. I can take it. But for the thousands of kids coming to terms with who they are, they shouldn’t have to take it.”

The awards show also displayed a video before the speech, recounting Jenner’s story and struggle.

“I’ve always known that I was different than everybody else,” Jenner said in the video. “I could play the male gender role, but I always felt female and that really scared me.”

“Relationships for me were always tough,” she went on in the clip. “I always felt like I was hiding myself from everybody. The only way I could get through life was by distraction. I did not want to deal with myself…. I wasted a lot of my life and nobody really knew who I am. And that’s sad.”

“To take my struggle, throw it out in front of the world, maybe I can bring understanding on this subject,” Jenner said. “It’s time that I do my best… This is not something that people have to die over.”

Jenner’s daughter, Kendall, also appeared in the video, talking about the media speculation and coverage, ultimately supporting her parent: “To finally be free, that must be the greatest feeling in the world.”

World Cup champion Abby Wambach presented the award at the ESPYS, feting the best in the past year of sports, which aired live on ABC.

Caitlyn Jenner first came out as a trans woman in April in a sit-down interview with Sawyer. She continued to make waves by appearing as a woman on the cover of Vanity Fair in June, debuting her new look and name.

Jenner is an iconic presence in the sports world, often called one of the greatest athletes of all time after her gold medal-winning run at the 1976 Summer Olympics.