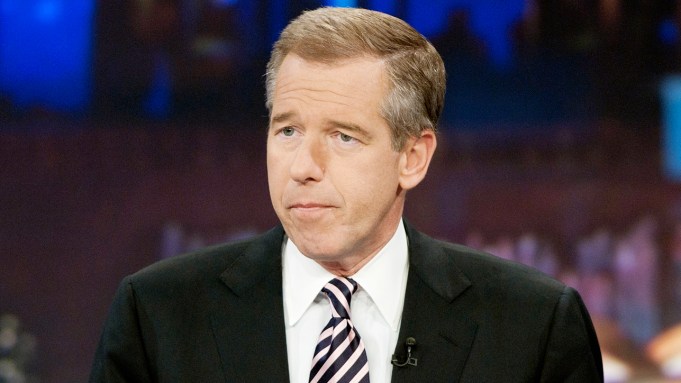 Brian Williams, the most-watched evening-news anchor on television today, has acknowledged that he falsely claimed to have been on a helicopter that was shot down by enemy fire while on an NBC News reporting trip in Iraq in 2003. The admission, which comes after other mistakes made by NBC News personnel in recent newscasts, could give rivals like CBS and ABC fodder in the ongoing struggle to lure audiences to the flagship programs of their news departments.

His recounting of the harrowing plane trip was, as it turns out, specious. Williams told the military-focused outlet Stars & Stripes in an interview published Wednesday that he was on a different plane that was never under fire and that landed safely about an hour behind one that had.

“I would not have chosen to make this mistake,” Williams said in the interview.  “I don’t know what screwed up in my mind that caused me to conflate one aircraft with another.” The Iraqi incident took place before Williams took over the “Nightly News” anchor desk from Tom Brokaw in 2004.

And yet, as the newspaper determined, Williams has told the false story several times since making the 2003 trip. In promotional releases and in comments made as recently as earlier this month, Williams told and retold a story about how he and an NBC News crew had been aboard a Chinook helicopter that was forced down by rockets and small-arms fire. In reality, according to crew members who were aboard the fallen whirlybird, Williams and his crew landed near the downed helicopter due to an impending sandstorm about to erupt in the Iraqi desert.

Williams addressed the issue Wednesday night on NBC’s “Nightly News With Brian Williams,” admitting that he “bungled” an attempt to thank one veteran in particular. “I made a mistake in recalling the events 12 years ago. It did not take long to hear from the brave men and women and their crews,” he said, alluding to the Iraq veterans who repudiated his account.

“I hope they know they have my greatest respect and, now, my apology,” he added.

In one instance in the past, Williams did offer the right details. Discussing the trip on a March 2003 episode of “Dateline,” Williams described the helicopter trip accurately. “On the ground, we learned the Chinook ahead of us was almost blown out of the sky,” he said while narrating a report.

Williams’ disclosure comes not long after NBC News has had to retract or further bolster reporting claims during important stories that were later found to be inaccurate. Earlier this month, NBC News chief global correspondent Bill Neely reported that suspects in France’s Charlie Hebdo killings were dead or in custody — information that was not accurate. Williams reiterated the details about six minutes later. The TV journalists had to retract the claims, and acknowledge the government-intelligence sources they had relied upon did not give sound facts.

Roughly a week ago, NBC News reported that Sgt. Bowe Bergdahl, the U.S. Army sergeant who was held captive in Afghanistan for five years after leaving his post before being rescued, was to be charged with desertion. The Pentagon denied the reports, and NBC News updated its report with new statements, though it did not admit its reporting was inaccurate.

While Williams has enjoyed a sound lead over his nearest rival, David Muir of ABC’s “World News,” the younger anchor has during certain parts of the year made inroads in the demographic most coveted by advertisers in news programming, adults between 25 and 54. But  NBC’s “Nightly” has beaten “World News” in that demographic in both December and January.