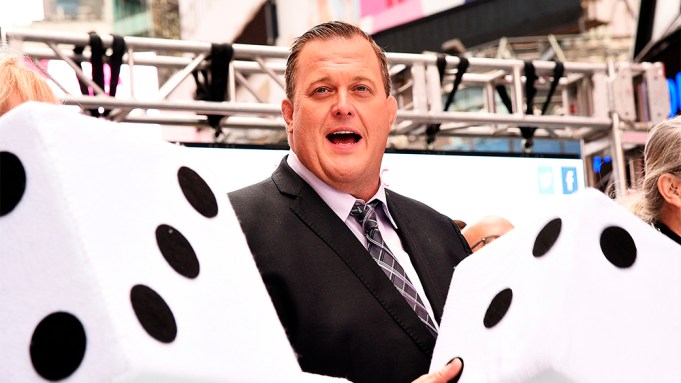 “Monopoly Millionaires’ Club,” the extremely flashy Las Vegas-set continuation of the multistate lottery game that ran last year, premieres this weekend. And while there are some hurdles that might keep it from passing “go” right away — the show is syndicated instead of dedicated to one network because some states don’t have a lottery system, and the lottery ticket game that prospective contestants entered to earn a place on the show was deemed too complicated and was suspended at the end of last year and brought back as an instant-win scratcher ticket game this month — there is one person who is ready to bet big on the project: “Mike and Molly” star Billy Gardell, who serves as host of the show.

Gardell explained that each of the show’s games is based on a symbol from the classic board game. You can win up to $100,000 in each of those subgames, culminating with the big game when the player who has risked the most gets to try his or her luck going around the giant Monopoly LED game. If you can land on Go within five rolls, you win $1 million.

The audience is divided into sections named after famous Monopoly pieces, and players are chosen from those areas. Audience members are incentivized to cheer their players on, as they can walk away with a piece of the winning pie. Twelve episodes have already been filmed, and the producers plan to go back for more with winners culled from the simpler scratcher-ticket lottery.

“The oddsmakers said we’d never give away a million in 25 games,” said Gardell. “We did it twice in the first 12. I think I gave the insurance guy a heart attack.”

Still, the Monopoly board game is not one known for its speed. Winning takes calculation and planning, and it’s rare for players to actually finish a game. Not this version, says Gardell.

“It’s super fast; there’s a lot of risk-it-all and go-for-it type moments,” he said. “They’ve taken all the images from Monopoly and made these quick-fast games … Ride the Rails is my favorite game. It’s based on the railroads, and it’s a giant board with this train in front of you full of cash cars. You have to hit the stop brake before you get the caboose. If you fill it up with $50 grand, we’ll double it and give you a $100,000.”

Gardell knows that this show will draw comparisons to a similarly named high-stakes game show, but he says he thinks of himself more as Jackie Gleason than former “Who Wants to Be a Millionaire” host Regis Philbin. Does this mean he won’t be sporting Philbin’s famous metallic ties?

“No, but I hope there will be some nice suits involved,” he said.