Watch: Bill Murray Jumps Out of Cake for David Letterman 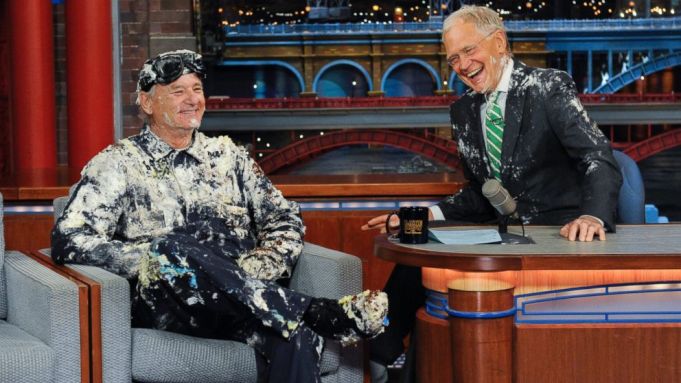 Parting is such sweet sorrow.

Bill Murray’s last appearance on the “Late Show with David Letterman” turned especially saccharine when he jumped out of a massive cake to surprise the retiring host. The actor proceeded to hug his longtime pal and pat his head with a palm full of frosting. He spread the love (and icing) to the audience as well.

Murray tried to convince Letterman to stay on air for just a few more decades, leading an audience chant of “more, more, more!”

“I don’t think my place is here trying to crowbar you into staying for another 30 years, I don’t think I should do that,” he said. “I think this is really something that is up to the American people to do, and I’m just going to be one person to try to organize this. If you’ll excuse me.”

He promptly exited the studio and entered the streets, recruiting New Yorkers to help him chant: “All we are saying is more Worldwide Pants!”

Murray is a fitting penultimate guest as he was Letterman’s very first guest on “Late Night” on NBC in 1982 and the first “Late Show” guest when Letterman moved to CBS in 1993.