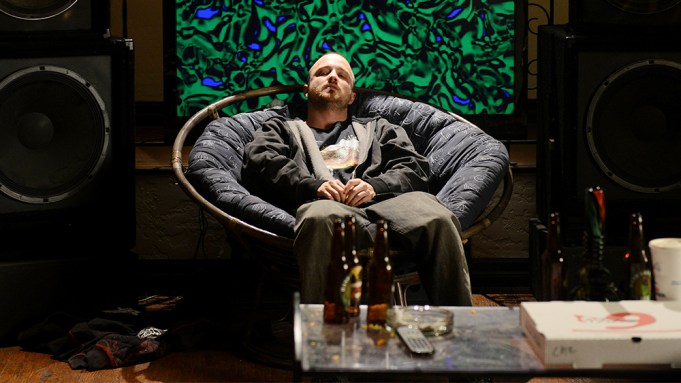 “Breaking Bad” fans have been asking the cameo question ever since “Better Call Saul” was announced — will Walter White or Jesse Pinkman make an appearance on the prequel?

Aaron Paul, who played fan-favorite Pinkman on the original series, tells Variety he hopes he can eventually guest star on “Saul.”

“We always have fun having that discussion — Vince [Gilligan], myself, Peter [Gould], the writers,” Paul said at Variety‘s annual unite4humanity charity gala. “We just have no idea how that would happen. But hopefully one day.”

Paul, who was honored at the pre-Oscar event with his wife, Lauren, for their work with her Kind Campaign, says he’s enjoying “Better Call Saul.”

“I love it,” he said. “It’s a little weird because it kind of looks like ‘Breaking Bad.’ It has somewhat of a little bit different tone, but I know everyone involved, and I’m not involved in it at all and it’s a little weird, a little sad, but it’s great.”

“Breaking Bad” executive producer Michelle MacLaren also told Variety that she’d like to see Paul and Bryan Cranston make a cameo on “Saul,” for which she directed an episode, but she doesn’t have much intel on the probability of a “Bad” reunion.

“Who knows what they’re gonna do, but it is a prequel, so [Paul] absolutely could,” MacLaren said. “I think it’s open to whoever Vince and Peter decide to bring in. I would imagine that everyone who would ask would say yes, but I have no idea what they’re going to do with it.”