Continue to Variety SKIP AD
You will be redirected back to your article in seconds
Feb 2, 2015 11:38am PT 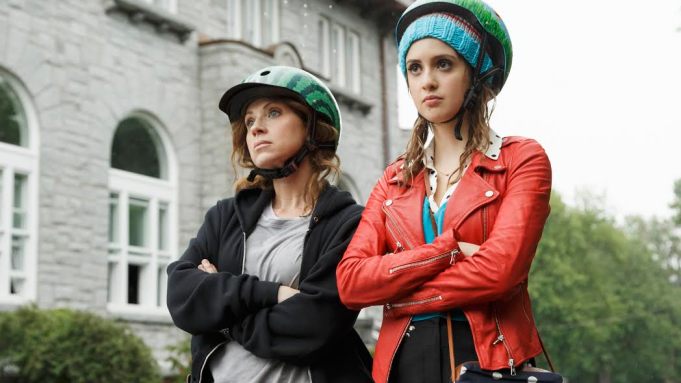 In anticipation of the Feb. 13 premiere, Variety has a sneak peek clip of “Bad Hair Day,” in which Marano stars opposite Baker, who’s also exec producing. The TV movie follows a high school tech wiz, Monica (Marano), on her disastrous prom day, starting when she wakes up with uncontrollable hair and a destroyed gown, and ending with her leaning on a cop, Liz (Baker) who’s on the search for a missing necklace that’s inexplicably in her possession. Prom day only gets worse when the unlikely duo is pursued by a dogged jewel thief (Christian Campbell) on a wild chase across the city.

The comedic duo tells Variety about their new pic.

Marano: I am so excited about having a DCOM! I literally used to watch Disney Channel Original Movies all the time when I was little, so having the opportunity to actually be in one was really cool.

Baker: I wanted to executive produce because I wanted to see what it was like to build and fulfill a vision from the ground up, and since this was Disney Channel’s first movie with an adult lead, I wanted that role to be protected and I wanted the movie to have my creative stamp on it.

How was the experience of filming your first DCOM?

Marano: We filmed “Bad Hair Day” in Montreal, which was really great because I actually randomly have family there. I absolutely loved Montreal. The filming itself was so fun — the crew was lovely. Even when we had really hectic, crazy days, I was having such a blast because the cast and crew were wonderful.

Baker: My first time executive producing was a fantastic experience for me. Being an integral part of the team from the beginning of the process to the very end was both challenging and extremely rewarding. I loved having my hands on every aspect of the movie.

What was the best part about working with each other?

Marano: Leigh-Allyn is so hilarious, and I honestly can’t imagine having as much fun as I did without her by my side. She completely knew what she was doing, and I felt so comfortable with her, as both my co-star and the executive producer.

Baker: Laura is a gem. Such a talent. It’s not always easy finding a young actress that can go toe to toe with an adult comedienne, but Laura Marano is the real deal, people! Her comedic timing is very rare for someone of her age, and yet she is very emotionally accessible as well. I look for her to have a long, lucrative career.

Do you want to do another DCOM?

Marano: Of course! I love working in general. so trust me, I would totally be up for doing another DCOM.

Baker: I would love to work with Disney again as an executive producer. It was a great fit on “Bad Hair Day,” and since the family unit makes up the majority of my fanbase, I can’t really imagine a better fit than Disney. My passion began with acting, but it has grown to include executive producing. I really cannot see one without the other at this point.

How was filming ‘Bad Hair Day’ different than being on the ‘Austin & Ally’ set?

Marano: Filming “Bad Hair Day” was completely different than filming “Austin & Ally” for a lot of reasons, but mostly because of the shooting style. With “Austin & Ally,” we sometimes film over 10 scenes a day because we have four cameras constantly shooting. “Bad Hair Day” had fewer cameras, so scenes would take longer to shoot. We would spend a whole day on one scene.