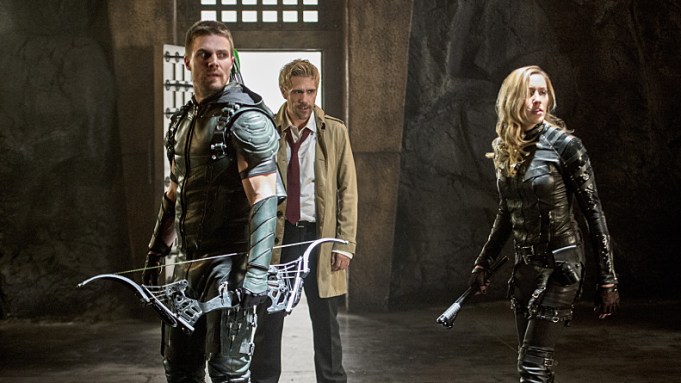 In season four of “Arrow,” Oliver Queen (Stephen Amell) is embracing his comic book roots by running for mayor of Star City, and in this week’s episode, that new mission kicks into high gear when Thea (Willa Holland) hires a savvy campaign manager, Alex Davis (Parker Young), to coach our hero through his political bid.

Variety has an exclusive clip of Oliver and Thea’s first meeting with Alex, in which the politico has some tough-love advice on how to minimize the likelihood of further scandal in Oliver’s already scandalous life — and most of it revolves around his tumultuous relationship with the Lance family.

Elsewhere in the hour, Oliver calls in DC Comics’ resident supernatural expert John Constantine (Matt Ryan) to help Sara Lance (Caity Lotz) recover from her dip in the Lazarus Pit. The CW has released a sneak peek of Constantine’s meeting with Team Arrow as the gang attempts to restore Sara’s soul.

Ryan recently told Variety that getting to don his character’s trademark trenchcoat again following the cancellation of his NBC series “did kind of sadden me a little bit. There are 300 issues of that comic book, and there are so many great stories to tell. We were just getting started, man.”

He added, “What’s great about that episode is that John comes into this ‘Arrow’ world, and everyone doesn’t believe, or doesn’t know about, these occult worlds beyond ours, and John’s just like, ‘Look, this is the way sh— is.’ And he’s an arrogant bastard as well, so everyone’s a bit thrown off by him.”