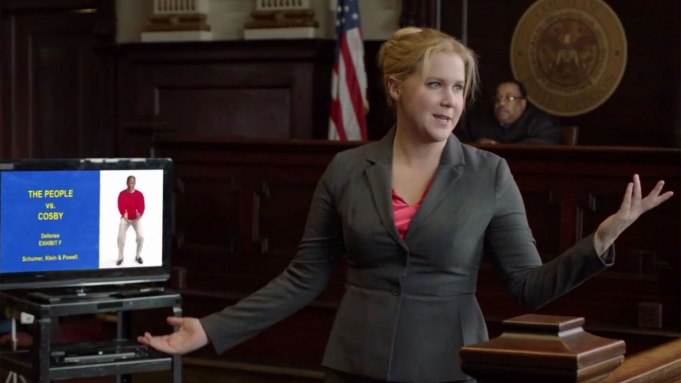 Comedian Amy Schumer is taking swings at rape culture once again, this time in a head-on sketch aimed at the accusations against Bill Cosby.

In a mock trial on her Comedy Central show “Inside Amy Schumer,” the comedienne acts as Cosby’s defense attorney, providing Pudding Pops and Dr. Huxtable sweaters to the jury and judge as part of the “irrefutable evidence” of Cosby’s innocence.

“Let’s remind ourselves what’s at stake here,” Schumer says during her “defense.” “If convicted, the next time you put on a rerun of ‘The Cosby Show’ you may wince a little. Might feel a little pang. And none of us deserve that. We don’t deserve to feel that pang. We deserve to dance like no one’s watching, and watch like no one’s raping.”

Schumer has worked extensively with director Judd Apatow, who has also been relentless in taking the accusations against Cosby to social media.

Cosby, 77, hasn’t been charged with a crime. As of May 27, 45 women have come forward with accusations against him.