Continue to Variety SKIP AD
You will be redirected back to your article in seconds
Feb 13, 2015 9:00am PT

‘Agent Carter’ Sneak Peek: Peggy Has Some Explaining To Do (EXCLUSIVE) 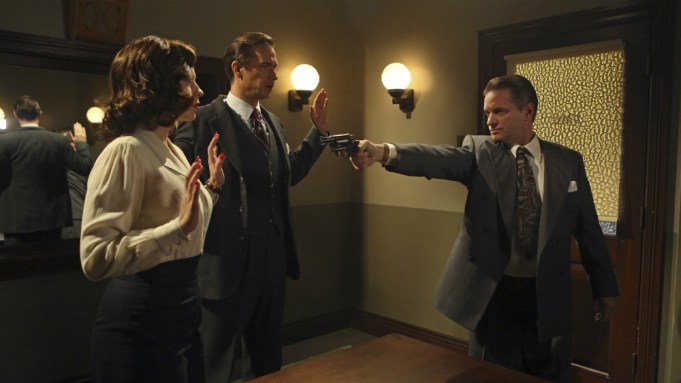 The stakes couldn’t be higher for Peggy (Hayley Atwell) in “Marvel’s Agent Carter,” and the penultimate episode sees our heroine facing her biggest challenge yet — proving her innocence to the SSR. After managing to stay under her colleagues’ radar all season while working to clear Howard Stark’s (Dominic Cooper) name, her luck finally ran out in the Feb. 10 episode, in which she narrowly escaped death at the hands of her Black Widow neighbor, Dottie (Bridget Regan), by being captured by Agents Thompson (Chad Michael Murray) and Sousa (Enver Gjokaj).

Variety has an exclusive sneak peek at the Feb. 17 episode, “Snafu,” which sees Peggy trying to convince her former allies that she’s not a traitor, as Thompson and Sousa play good cop/bad cop in their interrogations.

Here’s ABC’s episode description for “Snafu,” which airs Tuesday, Feb. 17 at 9 p.m.: Peggy is cornered and more vulnerable than ever as Leviathan makes their move against her. As the SSR zeroes in on Howard Stark, they may pay the ultimate price as they find their true enemy is closer than they realized.