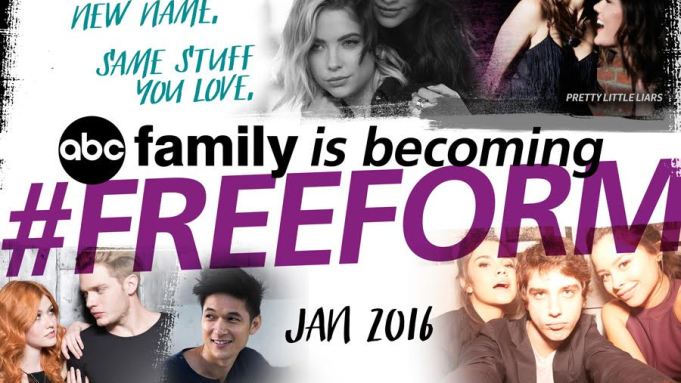 The relaunch, which will coincide with the cabler’s popular “25 Days of Christmas” and winter premieres, marks a continued effort to evolve the young-skewing network past traditional family viewing and toward its target audience of “Becomers,” a network-coined term defined as those in the life stage spanning ages 14 to 34.

The Becomer audience — a concept ABC Family execs introduced at this year’s Upfront presentation — reflects the network’s efforts to keep up with its millennial viewers as they grow up. “The most important question that young people ask themselves as they’re going from high school to their thirties is, ‘Who am I becoming?’ So we call the life stage ‘becoming’ and the people going through it Becomers,” Ascheim explains.

“This is a long time coming. It really is an evolution of something that started 10 to 12 years ago when this network began to focus on what were then millennials. The network built incredible strength and incredible ratings success with young people, especially women,” Ascheim tells Variety. “And then something funny happened on the way of the demographic dance where millennials were no longer synonymous with youth. The oldest ones are turning 40 in a couple of years.”

In addition to adapting to the growing audience, the rebrand is also an effort to reach new viewers who may associate ABC Family with too much, well, family.

“With people who don’t watch the network, which turns out is the majority of this country, there’s a very different perception from our core viewers,” Ascheim says. Recent research conducted by the network had core viewers rewarding the net for many great attributes across the board, he reports, while non-viewers identified the net as “family-friendly” and “wholesome” and gave “pretty lousy marks on everything else.”

“It made us realize that for us to grow and reach new customers, we really had to do something about the perception gap, and not be hindered by our label,” Ascheim explains.

The new name “Freeform” reflects the essence of the audience, says Ascheim: “We think that they are indeed in formation so on some level, so it really feels like it invokes the quality of being a Becomer.”

Ascheim adds that the new name also reflects the network’s goal that users will be active contributors. “Media is oozing onto all sorts of different screens and platforms and it feels kind of free form in the way that people find it,” he says. “Our audience doesn’t see themselves as consumers, but as makers so we wanted a name that felt participatory — they would be part of the process, not just being fed stories.”

That participatory effort will be utilized in today’s announcement, which in addition to heavily featuring messaging across the network’s social platforms, will feature a user-generated campaign where fans are encouraged to submit photos and videos to express what defines their own “Freeform” — or what fuels the passion in their lives. (Watch part of the announcement campaign in the video above.)

Nigel Cox-Hagan, ABC Family’s SVP of marketing, creative and branding, notes that rebranding a network is a “gradual and sustained process,” when asked of any concerns with losing the ABC brand recognition. (The network’s new logo will be revealed at a later date.)

“We’re going to use every level and every platform that we have to bang the drum about our new name,” he says. He also points out that as the most social cable network, the channel already has a captive audience readily awaiting information to be tweeted at them, not to mention highly socially engaged talent.

“From the inception of this evolution, we’ve realized that our stories are Becomer adventures and our core stars are all themselves Becomers,” Cox-Hagan says. “Once we had that insight, we realized they would be great spokespeople to our audience about that change.”

Ascheim emphasizes the network’s programming won’t change, pointing to the commitment to doubling original programming over the next few years, which was also announced at this year’s Upfront. “That commitment remains strong and vivid and happened before we changed the name, and will be part of what I think makes the name come to life,” he says.

He also looks forward to developing more efforts like the recently-announced Nicki Minaj-inspired comedy. “I think it’s part of the evolution of broadening and recruiting new viewers, while keeping current viewers happy,” he says.

Coinciding with the official re-branding in January 2016 are new shows (addiction drama “Recovery Road” and the hotly anticipated saga series “Shadowhunters”), in addition to some of the network’s most popular hits returning (“The Fosters,” “Young and Hungry,” “Baby Daddy” and “Pretty Little Liars”). Cox-Hagan tells Variety a huge campaign promoting Freeform will surround “Shadowhunters'” debut. “It will be very ubiquitous messaging that will be hard to miss,” he says.

“ABC Family has had a lot of success, and it feels really good,” says Ascheim. “I think it’s going to feel even better to unite ratings strength and show strength with brand strength.”

Looking back at ABC Family’s origins, this isn’t the first time the channel has been rebranded. The network went through several names in the years it was owned by evangelist Pat Robertson since its  1977 launch. He sold the network 20 years later to News Corp. and Saban Entertainment when it was known as The Family Channel, which those companies renamed Fox Family Channel. Disney bought the network from them in 1991, and dubbed it ABC Family.