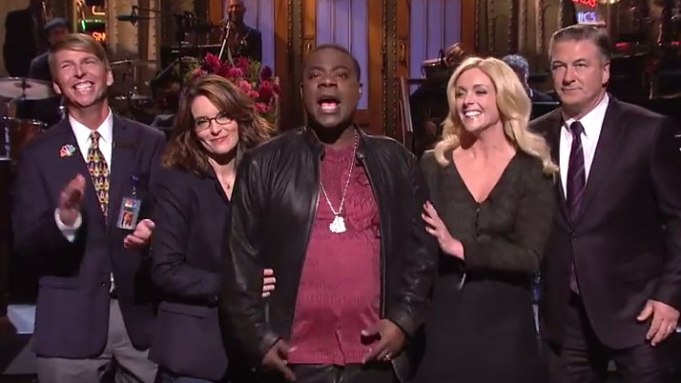 Tracy Morgan made his return to “Saturday Night Live” this week after his devastating car accident, and he brought along a few high-profile friends to back him up.

Morgan’s opening monologue for the show he hosted turned into a “30 Rock” reunion, bringing his former co-stars Tina Fey, Alec Baldwin, Jane Krakowski and Jack McBrayer back for a spoof of the NBC sitcom, which ended in 2013. The parody episode “predicted” Morgan’s car accident, which left him with severe injuries and killed his friend and fellow comedian James “Jimmy Mack” McNair.

“I just want to say one last thing, Tracy, from the heart and this part is no joke,” Fey said, stopping the bit for a serious note. “We’re so happy that you’re okay and we’re happier that you’re ready to make people laugh again.”

After the sketch, the “30 Rock” alums joined Morgan on stage to help him ring in the “SNL” episode. During the monologue, Morgan also took an emotional second to thank “SNL” chief Lorne Michaels, who Morgan called his Obi-Wan Kenobi. The comedian said he called Michaels after his accident and told him, “I said, ‘Lorne, when I get back on my feet, I want to come home,’ and here I am.”