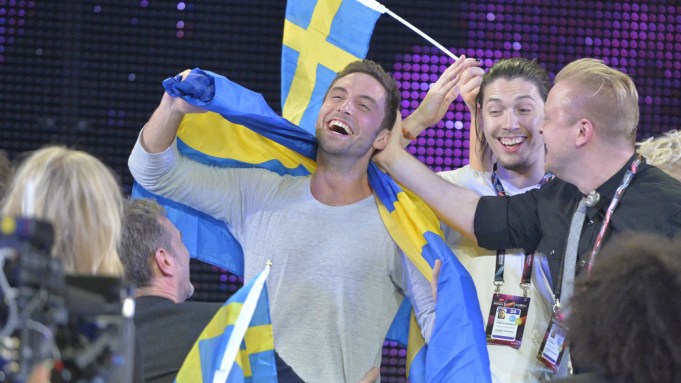 LONDON — Sweden’s Mans Zelmerlow won the 60th edition of the Eurovision Song Contest on Saturday in Vienna, Austria. The show attracted a television audience estimated at 195 million across 45 countries, including China for the first time.

The 27 finalists included Australia, which was taking part for the first time. The finalists performed live in front of an audience of 10,000 at the Wiener Stadthalle in the Austrian capital. This followed semi-finals, in which 40 countries took part, on May 19 and 21.

The show was a co-production between the European Broadcasting Union and Austrian broadcaster ORF. More than 1,600 journalists from 85 countries covered the event in Vienna.

After the contest, the ballots cast by Macedonia and Montenegro were disqualified after it was discovered that they had excluded their professional juries from the voting process. According to the rules of the contest, national ballots should be cast by each country following a combination of a public vote and a vote by national juries consisting of music professionals. PricewaterhouseCoopers oversaw the voting process, which was managed by Germany-based company Digame Mobile. The order in which countries declared their ballots was determined by an algorithm, which was created by a Swedish professor to mask the eventual winner for as long as possible.

The show’s hosts, Arabella Kiesbauer, Alice Tumler and Mirjam Weichselbraun, alongside last year’s winner Conchita, emphasized the contest’s “Building Bridges” theme, and attempted to dissuade the audience from booing the Russian contestant. The booing had also been a feature of last year’s event, and is a response to Russia’s military conflict with Ukraine, and its anti-gay legislation.