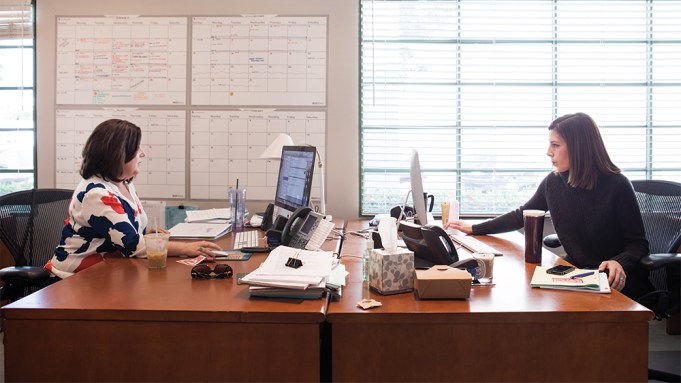 Tara Butters and Michele Fazekas might be legally married to other people — but professionally, they might as well start sending out invitations. The two producers, who share showrunning duties on ABC’s “Resurrection” and “Marvel’s Agent Carter” (the latter of which premiered Jan. 6), spend nearly every waking moment together, from the early-morning walk of their kids to school (they live a mile apart in L.A.’s San Fernando Valley), until they leave the Burbank studio late at night.

Spanning 20 years, their producing partnership — and best-friendship — has taken them from “Ed” to “Law & Order: SVU” to “Reaper,” and led them to their current roles of simultaneously running the two high-concept dramas for the Alphabet.

Their workload is not for the faint of heart. Over the course of a single day, Variety followed them as they broke stories in both writers’ rooms, took notes calls from the studio, edited an episode of “Resurrection,” attended an international press junket for “Carter,” supervised a rehearsal for “Carter,” and approved costumes, casting and marketing images. All in a 12- to 14-hour day’s work.

Not that they’re attached at the hip. Over the course of their showrunning marriage, they’ve developed a divide-and-conquer strategy. Fazekas often handles editing and music decisions; Butters, who was a graphic design major at Loyola Marymount U., typically signs off on marketing and advertising. She’ll also usually stay in the writers’ room to oversee story development.

Sometimes, though, it simply comes down to who’s in the mood to handle which problem. “I probably will be the one to have fights with people,” says Fazekas with a laugh.

Given all the work at hand, there are days they don’t see each other, so they’ve learned to trust each other implicitly. “I can’t think of a decision that I wouldn’t trust Tara to make,” says Fazekas.

That’s an evolution, they admit, from early in their partnership, when they both had to be in every meeting. Now, as they manage the workload of juggling two shows, they’ve accepted that they both don’t have to be on every call.

“We always say that this was very good practice for marriage,” says Fazekas, who’s been wed for eight years. (Butters’ husband of 10 years is “Arrow” exec producer Marc Guggenheim.) “I think one of the valuable things you learn in any partnership, and you could almost apply anywhere in conflict resolution, is that you go with who feels more strongly about something. And you can always tell.”

Neither show was Butters’ or Fazekas’ original concept; more important to Moran was their skill and experience as collaborators. He brought them in to “Resurrection” to work with creator Aaron Zelman on shaping the series. And when “Carter” got the greenlight, they were the first names that came to mind to shepherd the show given their appetite for genre, Moran says.

Both series were short orders — 13 for “Resurrection,” eight for “Carter” — so handing them the reins of both seemed manageable, at least from a practical point of view. The two women agreed, as long as both writers’ rooms could be on the same lot. “Carter” shoots there as well (though “Resurrection” is produced in Atlanta). “The proximity of being able to get to set cannot be beat,” Butters says.

The draw of working on a buzzy Marvel property wasn’t a bad selling point, either.

“We were so easily hooked on it,” Fazekas says. “Plus, I love film noir and the 1940s. So that’s why we agreed to do two jobs at once. It’s almost the only thing that would have tempted us to take on this workload.”

The pair spend most days bouncing back and forth between the writers’ rooms as needed, putting out fires as they pop up. It’s all about triage.

Yet the vibes in the two rooms couldn’t be more different. While “Resurrection” is far more somber and measured, “Carter” is like walking into a playroom. Despite the intense level of secrecy insisted upon by Marvel — encrypted key cards are needed to get in, scripts are shredded daily — the writers seem to thrive under the pressure. The teasing, the pranking, the football tossing starts when Butters and Fazekas arrive. Then again, it’s probably been going on all day. A debate over a scene somehow segues into a long yarn about drowning kittens. (You had to be there.)

“That’s why we tend to end our day in there,” explains Fazekas with a laugh.

That’s more a reflection of the series than the writers, say the showrunners, who hand-picked the staff for both, choosing many they’d worked with before. (They chose their friend of 15 years and ex-“Reaper” colleague Chris Dingess to help them lead “Carter.”)

Fazekas says that of the two programs, “Resurrection” is the tougher one to develop ideas for. “It’s a very difficult show to break, because the story engine is not readily apparent,” she says. “The engine on ‘Carter’ is a lot clearer. So I think you have room to have more fun.”

The two credit Tom Spezialy and Neal Baer with teaching them how to be showrunners and launching their careers. Frank Spotnitz, Fazekas’ boss on “The X-Files,” gets kudos on that account, too. That’s how they first met: Spotnitz encouraged Fazekas to work on a spec script; Butters suggested they turn it into an episode of “Buffy the Vampire Slayer.”

The friends talked it through during a car trip over Thanksgiving weekend, showed it to Spotnitz and Vince Gilligan — who loved it and helped them get an agent, ICM’s Chris von Goetz (who’s still their agent). Three weeks later, they had a job. They’ve worked consistently ever since.

“We train writers to be producers,” Fazekas says.

They want to pass along the tradition Baer indoctrinated in them of leading scribes through prep and production and post. “There’s so much work to be done,” Fazekas adds. “It makes the shows better. There are people here who are going to be great producers.”

The two women are grateful to Moran for trusting them to run a show — or two — that wasn’t theirs. “We learned that we could actually do it,” Fazekas notes. “It’s not always easy, and it’s not always a good fit.”

Now Butters calls “Carter” the best job she’s ever had. That said, the two women want to develop their own show next — once they take a much-deserved break.

Says Butters, “It’s only a good partnership if we’re both still having fun.”

Adds Fazekas, “And it’s only a good job if we’re both still having fun.”