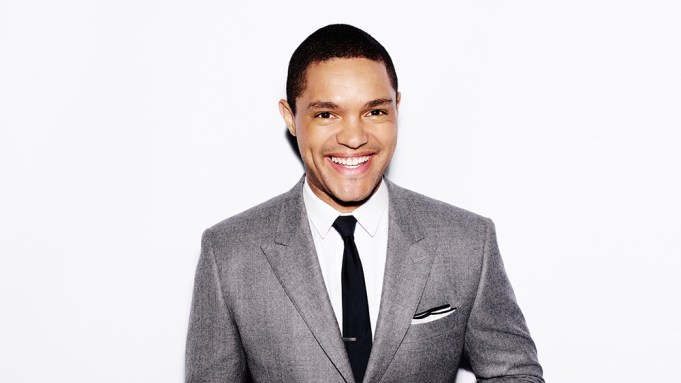 Despite anticipation (and perhaps some dread) that Trevor Noah would bring a new spin to “The Daily Show,” there was clearly scant interest in reinventing the wheel – or rather, changing the orbit of the globe. That said, Noah’s debut found him looking more at ease and in command than he ever did as a correspondent, exhibiting a self-effacing streak about replacing Jon Stewart and a facility for selling jokes at the desk. While Stewart left big shoes to fill, Noah’s first at bat suggests the format remains durable enough to let him find his footing.

Noah opened with what amounted to an introduction, citing his modest upbringing in South Africa and his unexpected hiring to succeed Stewart (“The family has a new stepdad. And he’s black”), after others turned down the assignment. “Once again,” he quipped, “a job Americans rejected is now being done by an immigrant.”

The new host then segued into material that certainly would have been at the top of Stewart’s list had he still been in the chair, from the Pope’s visit to America to John Boehner resigning as House Speaker. The former offered an excuse to make a below-the-belt joke about how well-endowed the Pontiff might be, while the latter created an opportunity for Noah and correspondent Jordan Klepper to engage in a thinly veiled discussion about replacing a veteran leader clearly intended to have two meanings.

The premiere also introduced new correspondent Roy Wood Jr., who did a funny bit about how water on Mars wouldn’t mean anything to black people, since only an anointed few – Beyonce, Oprah – would be considered to visit the planet.

It all felt like vintage “Daily Show” material, with most of the initial changes appearing to be cosmetic, from a new font to not bleeping certain expletives. As for Noah’s skills as an interviewer, Kevin Hart, frankly, wasn’t the ideal guest to offer much insight regarding those chops, yielding an exchange that was loud and manic, much like the comic’s act. New Jersey Gov. Chris Christie is slated for Wednesday, which should offer a better sense of the new host in that regard.

Much remains to be seen about whether Noah’s youth (he’s 31), race and origins will influence the mix of stories or guests, although after seeing this first episode, the hype about that — and indeed, surrounding the debut in general — has bordered on the absurd. That’s because in the broad strokes Comedy Central looks to have employed an “If it ain’t broke, don’t fix it” approach.

As producer veteran late-night Peter Lassally noted, matching what Stewart brought to the show won’t be easy. Yet while there will no doubt be those who miss Stewart, or don’t warm up to Noah, for now, anyway, it doesn’t look like anything here is cause to make that globe suddenly spin off its axis.