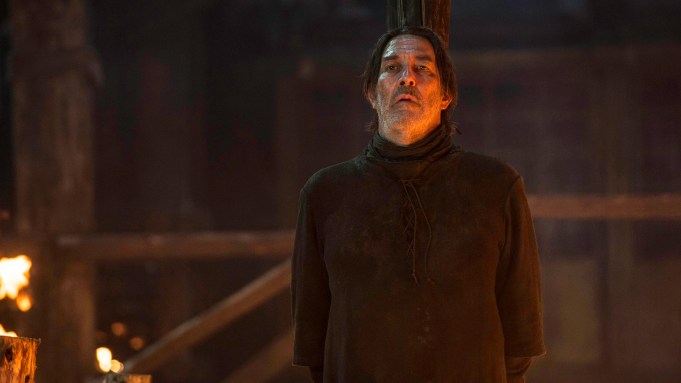 “Game of Thrones” has a reputation for gigantic penultimate episodes, followed by lower-key season finales. Well, so much for that theory. In a head-spinning sequence of events, the fifth season’s closing chapter delivered an abundance of jaw-dropping moments, ending one quest to sit on the Iron Throne and leaving other key players suspended – at least until the next go-round – in considerable peril. Although the season was marred by controversy regarding its brutal treatment of female characters, the finish offered a reminder that there is simply nothing else on TV to rival the show’s immersion into a world of such epic storytelling.

The credit “directed by David Nutter” – the pilot maestro who brought his distinctive touch to the shocking “Red Wedding” episode – might have been the first clue that this would be an hour that would command undivided attention. That began (and SPOILER ALERT if you have yet to watch) with the inevitable assault by Stannis (Stephen Dillane) on Winterfell, after having engaged in an act of barbarous self-interest in the previous episode by literally sacrificing his daughter on the altar of his own ambitions.

That Stannis not only had his forces routed but was dispatched by the noble knight Brienne (Gwendoline Christie) brought a certain poetic closure to that thread, while doing little to ease anyone’s mind regarding the fate of Sansa (Sophie Turner), whose abuse at the hands of the sadistic Ramsay Bolton (Iwan Rheon) triggered criticism earlier in the season.

Before going further, a brief word about that interlude: While “Thrones” has clearly established that George R.R. Martin’s creation is a fictional land filled with acts of violence and cruelty, showrunners D.B. Weiss and David Benioff have done themselves no favors by refusing to address what constitutes legitimate criticism. Something along the lines of the boilerplate language that HBO drafted a year ago, and reissued in response to this plot line, would suffice: “The choices our creative teams make are based on the motivations and sensibilities that they believe define their characters. We fully support the vision and artistry of Dan and David’s exceptional work and we feel this work speaks for itself.”

There is a difference, it should be noted, between apologizing to one’s critics and simply acknowledging them. And if the producers think that’s beneath them, to paraphrase a popular saying in comic-book circles, with great popularity comes a certain responsibility.

At any rate, for those who thought that Stannis’ death would be the episode’s highlight, “Thrones” was just getting warmed up. Beyond Sansa’s uncertain fate, that included the brutal revenge exacted by Arya (Maisie Williams) against a sadistic pedophile; Daenerys (Emilia Clarke) failing her version of “How to Train Your Dragon” – and potentially being reunited with some old friends; and another jolting act of revenge against the Lannisters.

Even that, however, paled next to the final two sequences, each of which carried the impact of a punch to the gut: Queen Cersei (Lena Headey) being subjected to a stripped-bare ordeal that will forever alter college kids’ perceptions of the term “walk of shame,” and the Caesar-like betrayal of Jon Snow (Kit Harington) by fellow members of the Night’s Watch, leaving the haunting image of him bleeding out his last into the snow.

The Cersei scene, while expected, still dragged on long enough to create a profound sense of discomfort. And as the series so often does, it played with the audience’s emotional nerve endings, almost forcing them to feel empathy for a character that has consistently exhibited her own ruthlessness. As for Snow, “Thrones” has demonstrated yet again that nobility is no assurance of longevity, and that becoming too attached to anyone is not conducive to fans’ mental well-being.

“Game of Thrones” is so unflinching that it’s obviously not for everybody, but it has managed to become an enormous hit nevertheless, through a combination of extraordinary scope and brilliant writing and performances. Personally speaking, as a critic who watches more TV than most people (or is likely healthy), no other series creates a greater sense of anticipation – or deflation, for that matter, upon realizing another season is over.

With its major collisions involving key characters – from Tyrion (Peter Dinklage) being abducted by the knight Jorah (Iain Glen) to Stannis’ attempts to enlist Jon Snow to his cause – this season was as good as any in the show’s historic run, and the finale capped that off on an extraordinary high note. If that has been at all obscured by the earlier criticism, as with those vying to sit on the Iron Throne, producing a series that burns this brightly isn’t for the faint of heart.