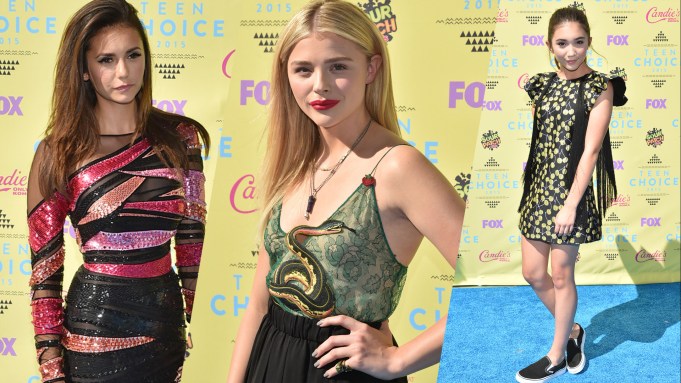 In a room full of screaming teenagers, the loudest message at the Teen Choice Awards came from the first winner of the night, Ellen DeGeneres.

“They say that teens make bad decisions, but you made a very good decision tonight choosing me,” DeGeneres joked, quickly switching to a more serious note, inspiring the young crowd to make the choice to be different.

“It feels good to be chosen, but there was a time in my life where I was the opposite of being chosen,” she said. “What makes you different right now makes you stand out later in life so you should be proud for being different.”

“Fitting in is really not all that matters,” DeGeneres continued, adding that the TCA’s coincided with her anniversary to Portia de Rossi, giving a shoutout to her wife. “What an amazing day this is…this is my seven year wedding anniversary.”

Following DeGeneres, the trio of hosts — Ludacris, “Jane The Virgin’s” Gina Rodriguez and Josh Peck from Fox’s upcoming comedy “Grandfathered” — kept the room entertained, while a slew of fan-favorite stars took away surfboards, including Chloe Grace Moretz, web sensation Shawn Mendes, the cast of “Pretty Little Liars,” Josh Hutcherson of “The Hunger Games,” NBA pro Stephen Curry (whose web-famous daughter Riley was not in the audience), One Direction via video (noticeably without former member Zayn Malik) and “The Vampire Diaries” alum Nina Dobrev who thanked Julie Plec, Kevin Williamson and her fans for supporting the CW show.

“Change is necessary for you to grow and learn and to better yourself,” Dobrev said, while wearing fake vampire teeth. “As this chapter of my life comes to an end, I look back and smile…these were six incredible years that I’ve had to pleasure of sharing with all you guys…change is coming, so hold on and enjoy the ride.”

Fox’s “Empire” won for breakout TV show. The cast also took the stage for their hit song “You’re So Beautiful,” which was one of the multiple live performances of the night, including Flo Rida and Robin Thicke with “I Don’t Like It,” plus Rachel Platten with her summer smash “Fight Song.” Platten’s performance honored teens making a difference in the world, showcasing them in a video montage on the stage.

The “Furious 7” cast won an award, in addition to the late Paul Walker who earned Choice Male Actor for the action flick. Vin Diesel‘s acceptance speech was the show’s highlight, temporarily turning the confetti-covered room into a glowing tribute.

“This was a very special movie for us all to make,” he said. “We make these movies with our heart, we really are a family… I can’t stand here and be rewarded like his without talking about somebody very, very important to us. One of the best lessons in our lives is the fact that we had the opportunity to call Paul our brother. Paul Walker is here in spirit with us.”

The “Furious” crew dedicated their award to Walker’s daughter, who was sitting in the audience. “Since this is the Teen Choice Awards,” Diesel said, “There’s one very, very special teen here and her name is Meadow.”

Digital phenom Tyler Oakley also inspired, telling Variety and other reporters in the press room, “A lot of people write off teenagers, and they are some of the most powerful people in the world. And they are literally the future. Whether it’s politically or in the entertainment sphere, their opinions matter and to say that they don’t is just ignorant. I think tonight is cool because it’s recognizing the opinions and the people who are making the stars of tomorrow.”

Though the Teen Choice Awards was overwhelmed with web stars and young talent, including the “Scream Queens,” “Modern Family’s” Sarah Hyland, girl band Fifth Harmony and “Teen Beach Movie’s” Maia Mitchell, some familiar faces showed up, including Britney Spears, who was present at the first-ever TCAs in 1999 and was honored as this year’s style icon.

Marianne Zumberge contributed to this report.