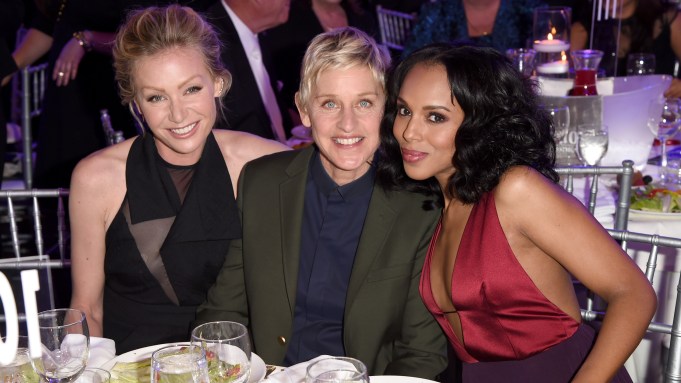 Kerry Washington, to whom Ellen DeGeneres presented the Vanguard Award for her work as an LGBT advocate, closed out the 26th Annual GLAAD Media Awards at the Beverly Hilton on Saturday with an earnest and empowering message.

“I’m going to say some stuff,” she began. “Not just for us, but because on Monday morning, people are going to click a link to hear what that woman from ‘Scandal’ said at that awards show.”

Washington said that the characters she plays often become political statements. Some natural qualities, like race and gender, are out of her control, but other times she has chosen to take on roles that portray underrepresented communities, like her work as a transgender woman in the film “Life Is Hot in Cracktown.” But the great irony, according to Washington, is that she does not choose roles in order to make a political statement, and the fact that they become so is a testament to the power of inclusive storytelling.

“Having your story told as a woman, as a person of color, as a lesbian, as a trans person or as any member of any disenfranchised community is sadly often still a radical idea,” she said, concluding with a call to action for more LGBT characters, storytelling and employment in front of and behind the camera. “We have to continue to be bold, and break new ground until that is just how it is — until we are no longer firsts, and exceptions, and rare and unique.”

Alex Newell, who played transgender student Wade “Unique” Adams on “Glee,” which recently aired its season finale on Friday, had the other standout moment of the evening when he performed “I Know Where I’ve Been” from “Hairspray.” Newell had also performed the song in a season-six episode of “Glee” called “Transitioning,” accompanied by a 200-person trans choir. With the “Glee” finale “slowly setting in,” Newell talked about the importance of playing a trans character in the show.

“It’s just a blessing to think my role helped someone come to terms with who they are and find their true identity, and just be themselves,” he said.

GLAAD CEO and president Sarah Kate Ellis said it has a been “a pretty fascinating year” for the LGBT community in entertainment. She added that it has been an especially important year for trans people to “finally be able to see themselves, and see their characters in rich and complex and interesting storylines.”

Attendees of event included ensemble casts and creators of shows that feature fair and inclusive representations of the LGBT community like “Transparent,” “How to Get Away With Murder,” “Looking,” “Sirens,” “The Fosters” and “Faking It,” among others. In addition to Washington, a star-studded group of allies attended, including Channing Tatum, Patricia Arquette and Zoe Saldana, as well as out members of the LGBT community such as DeGeneres and Portia de Rossi, director Roland Emmerich and comedian and host of the evening Tig Notaro.

The power of the show, to her, comes from watching “the true journey of (Connor’s) character and finding his compassion, finding love, being who he his, being ballsy, confident, beautiful… What’s not to love?” Davis asked. “Listen. I mean, come on. That’s bad–ss.”