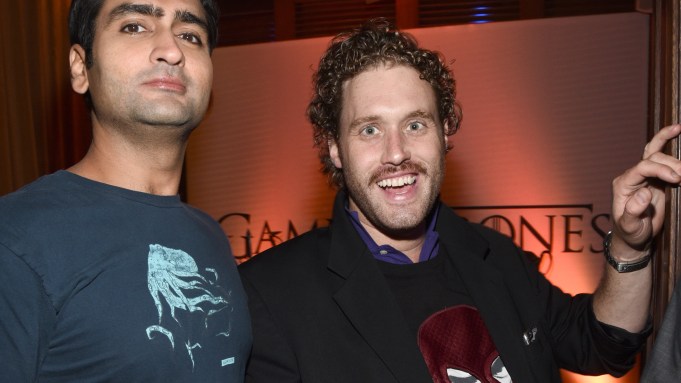 “This is always my favorite party. You see everyone here!” said Yvette Nicole Brown of Entertainment Weekly’s annual Comic-Con party, held Saturday atop the Hard Rock Hotel in San Diego. The “Odd Couple” star — and Comic-Con regular — had moderated the “Once Upon a Time” panel earlier that day.

Jennifer Lawrence held court with Mehcad Brooks in a private cabana, while her fellow “X-Men” stars worked the room. James McAvoy and Nicholas Hoult danced with “Game of Thrones” stars Maisie Williams and Sophie Turner, headbanging as the DJ rocked the house.

There was a “Southland” reunion as “Walking Dead” star Michael Cudlitz caught up with “Gotham’s” Ben McKenzie.

“X-Men: Apocalypse” star Tye Sheridan attempted to cut the line for the real star of the party — a photobooth featuring the Iron Throne — before admitting to the photographer that he doesn’t watch “Game of Thrones.”

Radcliffe kept things low key in the smoky corner of the party along with “Pride and Prejudice and Zombies” star Douglas Booth.

By the mini-golf course, “Agents of SHIELD” stars Chloe Bennet and Elizabeth Henstridge rushed over to “Outlander” star Sam Heughan to express their admiration, while Clark Gregg reunited with his “Much Ado About Nothing” co-star Amy Acker on the couches.

In what has become Con tradition, Joss Whedon danced the night away by the elevators, surrounded by his Marvel crew, including the “SHIELD” team.

“The Walking Dead” cast — including Scott Wilson — staked out a prime spot in the center of the party, where they were kept busy by admirers all night.