Continue to Variety SKIP AD
You will be redirected back to your article in seconds
Oct 4, 2015 10:21pm PT 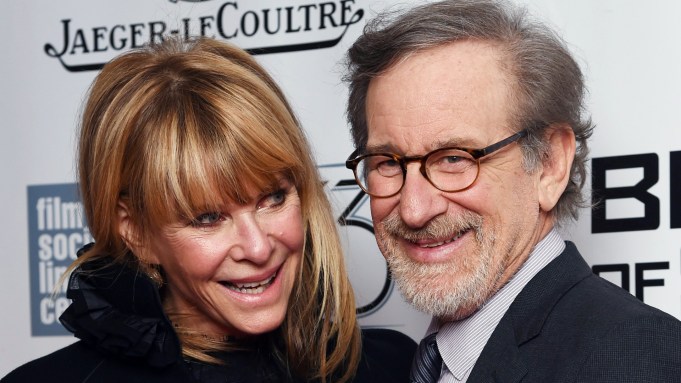 “Bridge of Spies” got the crowd to its feet at its world premiere screening Sunday at the New York Film Festival, with the audience giving a standing O to director Steven Spielberg and a cast led by Tom Hanks as the credits rolled.

“Half this movie is shot in New York,” he told the opening nighters. “The first half of this movie I dedicate to you. And then when I go to Berlin in a month, I’ll dedicate the second half to them.”

One of sequences that got audiences talking was the largely wordless opening sequence for which there’s no musical score — just the sounds of the city. “When I walk around the streets of New York, I don’t hear an orchestra,” he said in an interview. “I hear all the taxis and dogs and subways.”

New Yorkers will recognize familiar theater faces up on the screen — Mark Rylance (who plays captured Soviet spy Rudolf Abel), Scott Shepherd, Billy Magnussen — alongside the likes Alan Alda and Amy Ryan. And it sounds like no one in the cast wanted to let Spielberg down.

“It’s a little terrifying,” said Wooster Group alum Shepherd, who plays a CIA officer. “I expected Spielberg to have made so many films that now he’s a little jaded. But his energy on set is infectious. It’s buoyant.”

“Just be prepared and show up. That’s what I learned from Tom and Steven,” Magnussen said. “Do your work to prepare and then have a good time with it.”

Heck, not even Hanks, who’s worked with Spielberg on multiple projects (including “Saving Private Ryan” and “Catch Me If You Can”), wants to disappoint the director. “You don’t ever want to find yourself making the last Steven Spielberg movie,” Hanks said in a post-screening Q&A, right before the cast headed off to an intimate soiree at the Museum of Natural History. “You really want to please the man.”