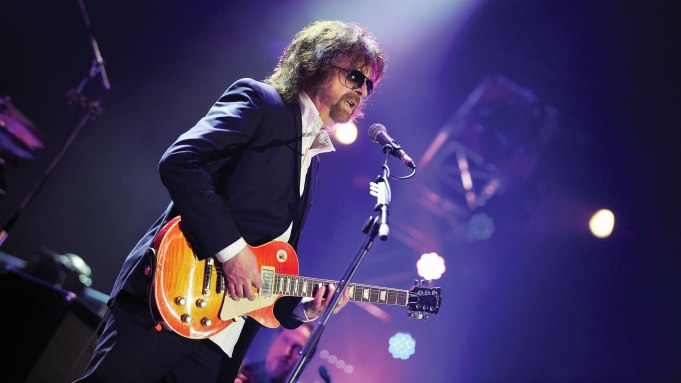 It’s not hard to find the irony when someone as private and reclusive as musician-producer Jeff Lynne is honored with a star on the Walk of Fame amongst one of the most tourist-populated streets in the world. Lynne is due to get his recognition in a ceremony set for April 23.

“I think it is marvelous,” says Lynne, who now resides in a sprawling mansion in Beverly Hills, complete with a world-class recording studio. “I never could have imagined this chap from Birmingham, England, would have his name on the Hollywood Walk of Fame. I know it’s a real populist thing and all that stuff, and it’s not usually my style, but you can’t turn that down! I am thrilled.”

The public recognition of Lynne’s five decade-long career is overdue, most likely because he has avoided the spotlight since he stopped touring with Electric Light Orchestra nearly 30 years ago.

After spending most of the intervening time as a producer and songwriter with the likes of Tom Petty, Roy Orbison; ex-Beatles Paul McCartney, George Harrison and Ringo Starr; and with his own super-group, the Traveling Wilburys, Lynne is now ready to resurrect Electric Light Orchestra and return to the road.

“That is the plan we’ve been talking about for a couple of years,” Lynne says. After headlining a one-off charity show at Hyde Park in London attended by 50,000 last fall, Lynne had a featured spot on this year’s Grammy telecast, where he joined Ed Sheeran for runs through “Evil Woman” and “Mr. Blue Sky,” with the latter song later named the “most Shazamed” song of the kudocast.

“It’s probably the second (live televised performance) I’ve ever done in my life, or something ridiculous like that,” Lynne notes.

But perhaps most importantly, he is set to release the band’s first album since 2001’s “Zoom.” Lynne will then take to the road starting in the fall. All the members in his ELO are new, except for original keyboardist Richard Tandy.

“It’s going to be called Jeff Lynne’s ELO, which is how it will always be from now on,” he says, a reference to the long-touring band called the Orchestra, which other former ELO members continue to work with.

Lynne says the hardest part of preparing for live performances again was getting his posture back in shape. “I rehearsed on my own for a couple of weeks, first,” he says of the Grammy performance. “I had to practice standing up and playing guitar and singing at the same time, because I had been playing sitting down in a studio for, like, 30 years. I realized it is a whole different way of looking at the guitar when you are standing up. All you can only see is the top edge of the fret board. I had been used to sitting down on a stool and playing it. It is a totally different view of the guitar.”

Of course, with so many years out of the spotlight, Lynne could be forgiven for wondering just how much fan interest a return to concert stages would hold. Prior to his Hyde Park performance, Lynne appeared for a few songs at a different charity gig, and the response was highly encouraging.

“I had to go on this morning radio show (in London) in the morning. And the announcer asked me if I thought I would play anywhere again, and I said that if anyone wanted to hear it, yes I would. So, he announced on the radio, kind of jokingly, ‘Does anyone want to come to a Jeff Lynne concert?’ And the guy got over 20,000 phone calls and emails in the first half hour! So, that was a great confidence-boosting thing for me.”

He says the new Electric Light Orchestra album will show a more reflective and deeper side of his abilities as a songwriter and arranger. The change, he feels, came when recorded and released a solo album of mostly 1940s and ’50s pop classics and show tunes such as “Bewitched, Bothered & Bewildered,” and “Love Is a Splendid Thing.”

“I learned so much from doing all those old songs on my last solo album, ‘Long Wave,’” Lynne says. “I was listening to Richard Rodgers and all these fantastic old songwriters from that era, and they were so clever. Musically, it would just amaze me. I was just marveling at how brilliantly (those songs) were constructed.”

Lynne’s legendary hits from his heyday with ELO in the 1970s have also been popping up everywhere, including high-profile movie soundtracks such as “American Hustle,” and national TV advertising campaigns, where songs like “Mr. Blue Sky” have been used repeatedly.

The versions being used, however, are not always the original ELO recordings. In 2012, Lynne painstakingly re-recorded his greatest hits from ELO, even though he has owned all the masters and the publishing on the original versions for years.

“I didn’t like the way they sounded,” he said. “I was totally faithful to the old songs. I didn’t change the songs or the arrangements. I did them exactly the same because what was wrong was the way I had produced. I really wasn’t too experienced then. I would rather hear them like this; I feel more comfortable listening to them like this than the old ones.”

Until the tour begins and the new ELO record is released, Lynne is happy to remain in his home studio making new recordings.

“That’s all I do, really,” he says laughing. “Maybe I’ll go out to dinner and meet me girlfriend. Then I come back and go in the studio again. I just love the studio. I can’t get enough of doing that, really.”