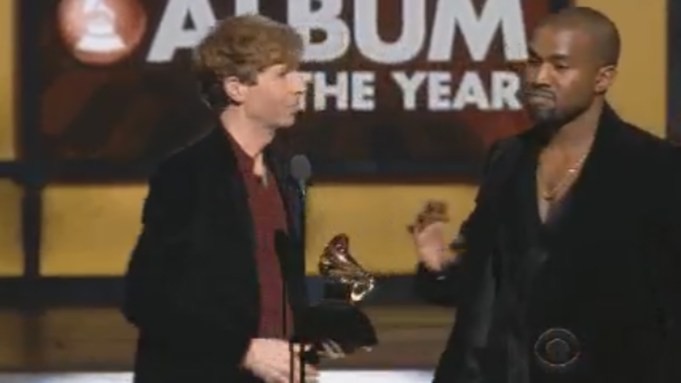 Beck shocked Sunday night when he won the Grammy award for album of the year for “Morning Phase,” beating out Beyonce, Ed Sheeran, Sam Smith and Pharrell Williams.

When Beck went on stage to accept the award, it looked like West jumped on stage with him, possibly to defend Beyonce’s honor like he did at the 2009 MTV Video Music Awards, infamously interrupting Taylor Swift.

However, the rapper smirked and sat down, but Beck seemed to encourage him, yelling, “Come on! Come back up!”

There was a lot of West at this year’s Grammys. He performed not once, but twice, the second time with Rihanna and Paul McCartney. Watch it all unfold below.

Jay Z didn’t immediately find it funny, though. His face quickly goes from horrified to comical as he slowly realizes his friend is in on the joke.