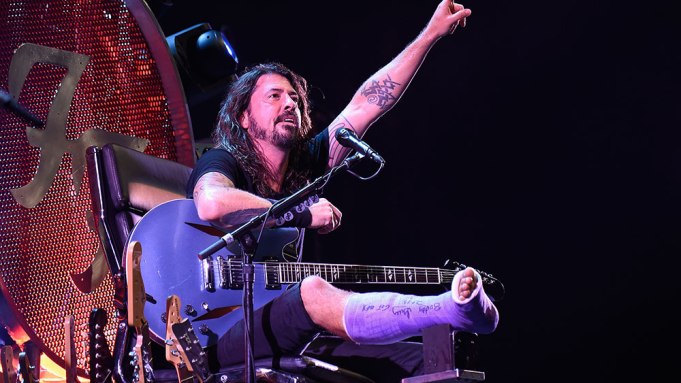 Not even a broken leg can keep Dave Grohl off the stage completely.

The Foo Fighters and its frontman (cast and all) appeared at the Robert F. Kennedy Memorial Stadium in Washington, D.C., Saturday night for their 20th anniversary Fourth of July concert. To deal with the injury that Grohl sustained last month, he sat on a giant, light-up throne, made of guitars, amps and more, with his leg kept upright.

The Foo Fighters had to cancel the remainder of its European tour last month after Grohl fell during its June 12 show in Sweden. Grohl underwent surgery after dislocating his ankle and snapping his fibula.

“My doctors have advised me to lay low for a while,” Grohl wrote in a letter to fans shortly after the accident. “The most important thing now is for me to recover from the surgery, to keep my leg elevated so as to keep swelling down and prevent any infection/complication that could do long-term damage.”

While on stage, the Foo Fighters played a cover of Queen and David Bowie’s “Under Pressure,” as well as favorites “Everlong,” “Best of You,” “Learn to Fly,” “Breakout,” “Monkey Wrench” and more, celebrating two decades since the debut of the band’s first album.