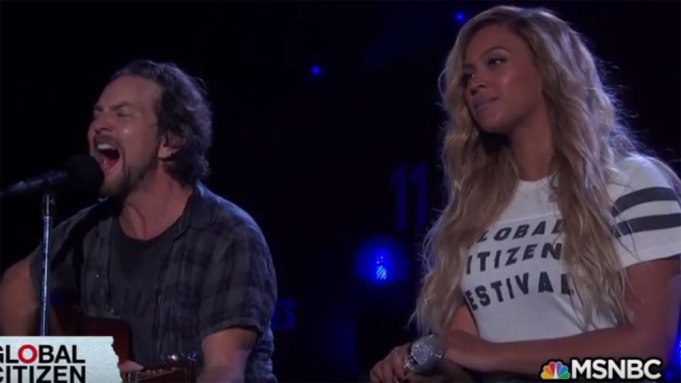 Beyonce and Pearl Jam’s Eddie Vedder don’t seem like the most obvious duo, but the two paired up on Saturday to take on a Bob Marley classic.

At the Global Citizen Festival in New York, Vedder paused Pearl Jam’s headlining set and welcomed Beyonce to the stage in a surprise appearance. Vedder strummed on an acoustic guitar as the two sang Marley’s “The Redemption Song,” trading verses and singing the chorus together.

In the middle of the duet, a video of Nelson Mandela played in the background, showing the late South African leader giving a speech about poverty. Pearl Jam previously covered “Redemption Song,” but not since 1995.

Beyonce and Vedder’s set was only one of the surprises at the one-day music festival. Beyonce also joined up with Ed Sheeran to sing “Drunk in Love,” and Pearl Jam covered John Lennon’s “Imagine.” Other duets included Coldplay and Ariana Grande, Sting and Common and Sheeran and Chris Martin.