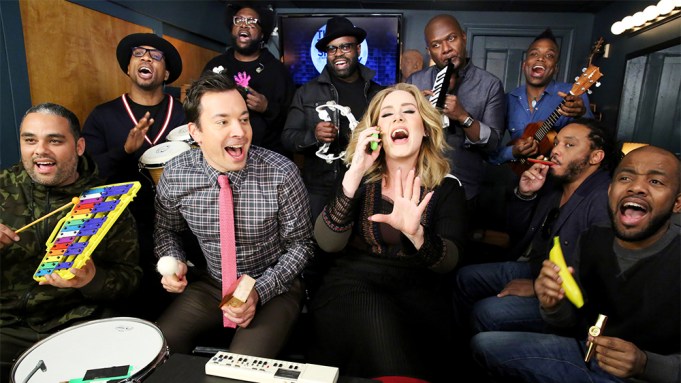 Adele’s hit single “Hello” won’t be saying goodbye any time soon. The song shattered the record for most albums sold in a week (2.43 million units), according to Nielsen Music, and recently topped the Billboard Hot 100 for a fourth week. Now, Jimmy Fallon and The Roots helped Adele give “Hello” an instrumental spin on “The Tonight Show.”

Adele powered through the vocals, using a lime green flip phone as a prop during one of the choruses. Fallon accompanied the singer with a wood block, bass drum and Casio keyboard. Other instruments the band used included an orange shaker, hand clappers, xylophone, melodica, ukulele, kazoo, banana shaker, bongos and tambourine.

Adele’s Tuesday night appearance on “The Tonight Show” comes after her weekend performance on “Saturday Night Live.” With Matthew McConaughey as host and Adele as the musical guest, the show saw a spike in ratings.

The Grammy winner also performed on the “Today” show Wednesday morning, singing “Million Years Ago” from her new album “25.”

NBC will air its one-hour special “Adele Live in New York City” on Dec. 14, marking the British songstress’ first concert in the U.S. since late 2011.