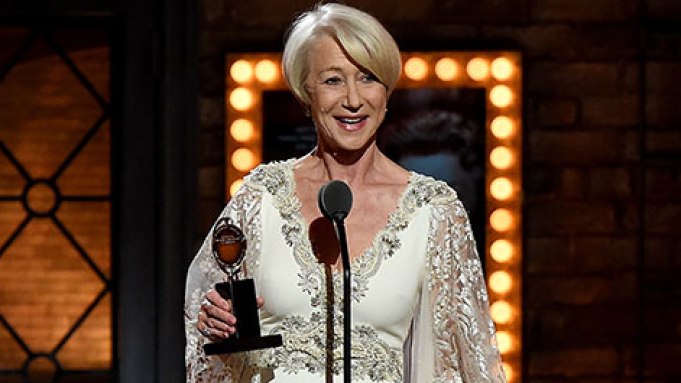 Now just a “G” away from an EGOT, Helen Mirren walked away from the 69th Tony Awards with the prize for best performance by an actress in a leading role in a play for her part in “The Audience.”

“The foundation upon which I stand is built — beautifully built — by an elegant and fleet play by Peter Morgan, an elegant and theatrical production by Stephen Daldry, an elegant and imaginative set by Bob Crowley, the great Bob Crowley, a stage management team — who is certainly not elegant — and crew who is stupendous. A dresser who is a rock, producers who rock and of course, an incredible cast of British and American actors who make the Atlantic look like a little creak you can just hop across,” the actress says while accepting her award.

It isn’t the first major award Mirren has won for playing Queen Elizabeth II — she took home an Oscar for playing the same role in 2006 in “The Queen.”

Mirren beat out the rest of a high-profile category of Geneva Carr (“Hand to God”), Elizabeth Moss (“The Heidi Chronicles”), Carey Mulligan (“Skylight”) and Ruth Wilson (“Constellations”) to take the prize. Shortly after she won, it was announced that her co-star Richard McCabe won the award for best performance by an actor in a featured role in a play.