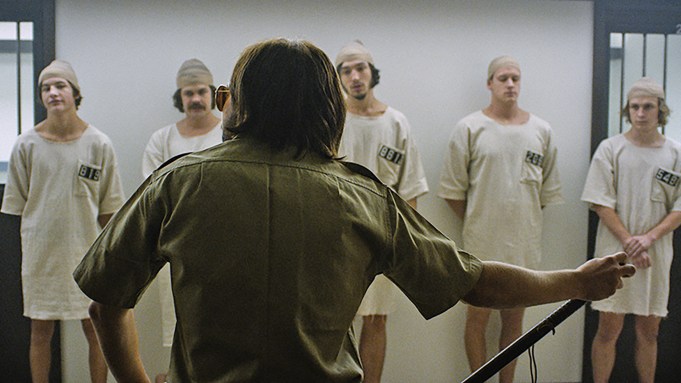 An elaborate behavioral simulation spirals shockingly out of control — and to a lesser degree, so does the movie — in “The Stanford Prison Experiment,” a grimly staged dramatic reconstruction of Philip Zimbardo’s notorious 1971 scientific inquiry into the psychology of power and the human capacity for inflicting and accepting abuse. In an ambitious step up from his intimate character studies “Easier With Practice” and “C.O.G.,” director Kyle Patrick Alvarez commits to a fully immersive procedural approach that potently conveys the study’s lengthy duration and claustrophobic intensity, making for a viewing experience that is by turns gripping, tedious and deliberately discomfiting. But for all its bludgeoning effectiveness, the film also manages to be at once heavy-handed in some respects and annoyingly vague in others; although sure to have its defenders, it’s probably too strong a dose of foul medicine to catch on significantly with the public.

Perhaps performing their own sort of audience case study, the directors of the 2015 Sundance Film Festival have programmed a pair of pictures centered around the galvanizing work of two leading social psychologists: Stanley Milgram, the subject of Michael Almereyda’s provocatively form-busting biopic “Experimenter,” and Zimbardo, the not-quite-subject of Alvarez’s more conventional and confrontational third feature. While both scientists have drawn no shortage of criticism for performing controversial experiments that would almost certainly never be allowed today, history has largely vindicated the disturbing relevance of their discoveries about a person’s willingness to inflict pain, whether they’re merely following orders (the 1960s Milgram study) or acting out their designated roles (the Zimbardo experiment). And in the post-Abu Ghraib era — or indeed, any contemporary reality where a uniform and a weapon confer authority — the instructiveness of both films and the studies that inspired them should scarcely be underestimated.

Adapted from Zimbardo’s 2007 book “The Lucifer Effect: Understanding How Good People Turn Evil,” which revisited the discoveries of his famous experiment almost 40 years later, Tim Talbott’s screenplay wastes no time on character backstories or other contextual niceties, opening with the August 1971 auditioning process conducted by Stanford psychology professor Zimbardo (Billy Crudup) and his team of researchers. Eighteen male students are screened and selected to play either guards or inmates in the “Stanford County Jail,” the site of a two-week observational study for which they will receive $15 a day. The decision to throw the viewer right in is a shrewd one: We know nothing about these young men (not even their names), making each one that much more chilling a blank slate.

Initially, at least, they all seem like bright, good-humored guys, their laid-back speech and ’70s attire bespeaking a greater affinity with the era’s countercultural ethos than with any sort of fascist tendencies; when asked whether they would prefer to play guards or prisoners, nearly all of them choose the latter. But the power of an artificially imposed scenario, or something so simple as a change of wardrobe, turns out to be more suggestive than even Zimbardo imagines. On day one, the guards, wearing uniforms and intimidating shades, round up their prisoners in a series of mock arrests and lock them in the basement of Stanford’s Jordan Hall — a tight, airless hallway where a few empty classrooms have been converted into cells. There, they order the prisoners to strip naked, spray them with disinfectant, and force them into beige smocks and stocking caps. Even during these early and relatively benign preliminaries, something in the atmosphere has decisively shifted.

Among the guards’ strict orders: Prisoners must remain almost entirely silent, eat at designated mealtimes, and address every guard as “Mr. Correctional Officer.” Failure to obey will, of course, result in punishment. Perhaps the experiment’s most important ground rule is that participants are forbidden from physically assaulting each other, though that doesn’t stop the guards from barking orders at the top of their lungs, or slamming their nightsticks against the walls and cell bars (every loud crack registers with visceral force in the excellent sound design) in response to even the slightest infraction. And it doesn’t take long for the half-naked prisoners to protest when they’re regularly trotted out of their cells for any number of humiliating activities, or roused in the middle of the night for exhausting group exercises. Two of the more rebellious inmates, known only as No. 8612 (Ezra Miller) and No. 819 (Tye Sheridan), attempt to fight back and establish solidarity with their fellow inmates, and are forced to spend long periods of time in a dark closet referred to as “the hole” as a consequence.

“Aren’t these guys taking this a bit too seriously?” one guy asks at one point. It’s a question that rebounds uncomfortably not only on the prisoners, but also on Zimbardo and his collaborators, who watch on ever-present surveillance cameras as their simulation disintegrates, over just a few days, into a circus of degradation and a possibly enormous liability. The less controlled the experiment, of course, the more potentially revealing it becomes, underlining the notion that the study of behavior is worthless unless it can push into the more extreme gray zones of human experience.

Alvarez proves highly attentive to the tricky legal, ethical and scientific minefield that Zimbardo must navigate as various prisoners try to either escape or make their case before a faux parole board, at which point all parties involved seem to enter into an almost surreal realm of situational make-believe. That’s especially true of Jesse Fletcher (the excellent Nelsan Ellis, “Get On Up”), an ex-con who spent 17 years in San Quentin and is brought in to help enforce and legitimize the experiment. It’s also true of Zimbardo, who stubbornly presses on with the experiment and brooks no dissent from anyone — not even Christina Maslach (Olivia Thirlby), a much younger student-turned-love interest, whose words of protest fall on deaf ears.

Strictly on a technical level, Alvarez’s filmmaking is largely faultless here. D.p. Jas Shelton’s use of widescreen expertly captures the tense group dynamics at play and the often-violent choreography of bodies within the frame, and his camera manages to find dynamic angles on the action while crucially conveying the suffocating sense of a locked-in environment. (Anytime the film moves outside the mock-prison setting, sparely appointed by production designer Gary Barbosa, the sense of relief is almost physically palpable.) And Andrew Hewitt’s score, by turns churning and ominous, adds a necessary jolt of momentum that keeps the proceedings from becoming as clinical as the context might demand.

At a certain point, however, the combination of relentless forward drive and gruesomely fastidious detail, while audacious and admirable in theory, begins to pay dwindling returns in a picture that feels rather longer than its 122-minute running time. Not unlike the study from which it derives its title, “The Stanford Prison Experiment” is an endurance test by design; to say that it’s often hell to sit through may be more of an objective observation than a legitimate complaint. The problem is not that this film is upsetting (it should be), but that it ultimately seems more interested in, and skilled at, dispensing regular shocks than fresh insights.

Alvarez himself has demonstrated a certain playful, almost experimental mindset toward his previous male protagonists (the relationally stunted hero of “Easier With Practice,” the young man torn between homosexuality and Christianity in “C.O.G.”), placing them in a series of increasingly uncomfortable scenarios, and monitoring their emotional progress with a detachment that didn’t necessarily preclude affection. He elicits excellent performances here from a sprawling ensemble with no shortage of standouts: Miller, unsurprisingly, shows a terrifying level of commitment to his role as one of the experiment’s most vocal protestors, while Michael Angarano is ferocious as the lead guard, who plays his designated role with far more sadistic abandon than anyone anticipated. And Chris Sheffield is quietly moving as a gentle prisoner whose principled attempt to hold onto one last shred of his identity becomes a powerfully understated act of defiance.

In the end, however, the picture seems stranded between two irreconcilable impulses: to individuate its characters, but also to treat them as abstract representatives of an all-too-corruptible humanity. Nowhere is this more apparent than with the depiction of Zimbardo himself, who became as dangerously caught up in the experiment as anyone else involved; yet in the aftermath of the whole affair (which was cut short after just six days), he crucially subjected all participants, himself included, to hours of psychological debriefing and a necessary moral reckoning.

The closing titles extol Zimbardo as a landmark figure in psychology — an interpretation that’s almost entirely at odds with Crudup’s performance, which presents the scientist as a nearly cardboard villain: callous, arrogant and almost criminally reckless, a one-man study in authoritarianism run amok. “We have become part of this experiment, whether we like it or not,” one of his collaborators opines, needlessly articulating a point that, like too much in “The Stanford Prison Experiment,” will have long become obvious to anyone who’s been paying attention.