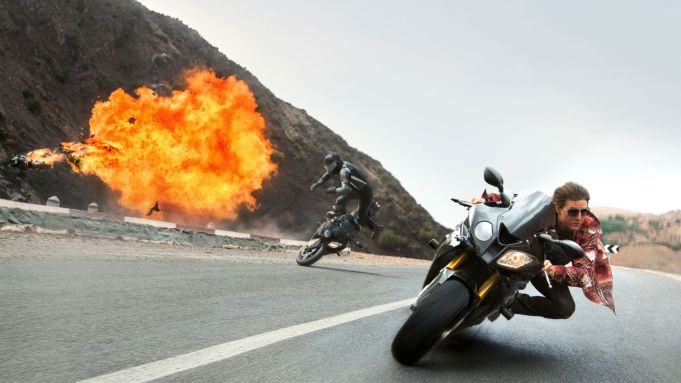 The theme that runs like a quick-burning fuse through “Mission: Impossible — Rogue Nation” is the tricky relationship between inevitability and chance — or luck, rather, as signaled by the brief appearance of a rabbit’s foot in one of Tom Cruise’s more brutal action sequences. It’s a dynamic that applies to the film as well: If the robust commercial performance of 2011’s “Mission: Impossible — Ghost Protocol” made a follow-up inevitable, then luck turns out to be very much on the side of this unusually spry and satisfying fifth entry, which finds the surviving members of the Impossible Missions Force trying to neutralize an insidious global threat, while struggling to convince their skeptical overlords that there is such a threat to begin with. The result is an existential quandary that writer-director Christopher McQuarrie negotiates with characteristic cleverness and a sly respect for the sheer durability of genre; at once questioning and reaffirming the pleasures of cinematic espionage, this is the rare sequel that leaves its franchise feeling not exhausted but surprisingly resurgent at 19 years and counting.

Despite early reports of soft tracking, this late-summer Paramount release should meet with a solid embrace worldwide, and could demonstrate considerable B.O. resilience through the doldrums of August. It’s worth recalling that the Brad Bird-directed “Ghost Protocol” overcame a slow start to become the series’ highest-grossing entry (nearly $700 million worldwide), suggesting there was still plenty of life in “Mission: Impossible” — and in Tom Cruise’s career, whatever personal embarrassments and professional setbacks he may have suffered along the way. After a few lackluster recent vehicles (“Jack Reacher,” “Oblivion”) and one terrific, underappreciated thriller (“Edge of Tomorrow”), it’s clearer than ever that Ethan Hunt is not just one of Cruise’s signature roles, but also a commercial oasis to which he can reliably return in between riskier attempts to extend his personal brand.

Or, as someone snarls in one of McQuarrie’s more amusing lines: “Hunt is the living manifestation of destiny!” And if the now 53-year-old Cruise isn’t quite limber enough to do full justice to that description, he continues to throw himself into harm’s way with energy, conviction and an astonishing disregard for life and limb. That much is clear from a set piece that has already figured heavily into Paramount’s marketing campaign, and which is wisely dispensed with in the opening scene: Bent on retrieving a cache of nerve-gas missiles from a band of Chechen separatist fighters, Ethan leaps onto a military cargo plane mid-takeoff and hangs on for dear life as terra firma recedes behind him — an astounding piece of airborne staging that Cruise, with his distaste for green-screen effects and his fondness for performing his own stunts, pulls off in typically sweat-free fashion.

The sequence is at once a tasty appetizer and a total red herring, and “Rogue Nation” swiftly gets down to business by putting Ethan and his fellow operatives out of commission. Citing the destruction of the Kremlin and other extensive property damage from “Ghost Protocol,” brash CIA boss Alan Huntley (Alec Baldwin) succeeds in dismantling the IMF and absorbing it into the Agency — a move that effectively paralyzes two of Ethan’s old pals, top analyst William Brandt (Jeremy Renner) and tech genius Benji Dunn (Simon Pegg), and proves serious enough to bring Ethan’s trustiest ally, Luther Stickell (an underused Ving Rhames), back in from the cold.

Still, those guys are doing relatively well compared with Ethan himself, who barely makes it through the opening credits before he’s accosted in London, tied up and repeatedly pummeled by a chrome-domed torture specialist called the Bone Doctor (Jens Hulten). It’s the work of a wide-ranging shadow organization known simply as the Syndicate (the “rogue nation” of the title), which has been setting off destabilizing waves of violence, civil unrest and catastrophe across the globe, some of which — far-flung industrial accidents, jetliners vanishing into thin air — have deliberately uncomfortable real-world echoes. Ethan’s mission, which he has no choice but to accept, is to take down this sinister group, which will require him to team up with the tellingly named Ilsa Faust (Rebecca Ferguson), a skilled but relatively untested British intelligence agent who has succeeded in infiltrating the Syndicate. (For all the film’s rampant globe-trotting, its casting choices and frequent London stopovers give it a markedly Blighty flavor.)

In classic spy-thriller fashion, it’s never entirely clear whether Ilsa is friend or femme fatale — especially after she and Ethan cross paths with a few well-positioned snipers at the Vienna State Opera, where a lavish performance of “Turandot” serves as both backdrop and modus operandi for an up-in-the-rafters assassination attempt. The curtain comes crashing violently down on that episode, but the movie’s second major action sequence is a marvel of precise execution and quietly fraught suspense, forcing Ethan to swim his way into a highly pressurized underwater cavern in order to lay hands on a weapon that could make or break the Syndicate. It’s a remarkably taut bit of business (shot on the large-format Alexa 65 6k digital camera), literally breathless in its intensity, yet executed with the sort of deftness and economy may remind you of Ethan’s early reference to the great jazz drummer Shadow Wilson and his famously “light touch.” Even when the characters are diving into giant water turbines or ripping up the streets of Morocco on motorcycles, that intricate, improvisatory lightness is a quality that McQuarrie’s film has in spades.

While the “Mission: Impossible” movies have employed a different helmer with each new installment, this is, notably, the first one to be directed and solely written by the same filmmaker — which may explain why, even at a pacey, slightly trimmable 131 minutes, “Rogue Nation” feels like the most dramatically sustained and conceptually unified picture in the series. To be sure, McQuarrie isn’t as flamboyant a stylist as his predecessors Brian De Palma and John Woo, and although it shares with “Ghost Protocol” the same superb cinematographer (Robert Elswit), the new film has an altogether darker, more workmanlike palette, with little of the previous film’s eye-tickling compositional flair. (And whereas “Ghost Protocol” boasted 27 staggering minutes of footage shot on Imax cameras, the image stays strictly widescreen in “Rogue Nation,” gaining relatively little from the giant-screen format in which it was screened for review.)

But whatever the filmmaking may lack in visual or visceral impact, McQuarrie (whose past collaborations with Cruise include directing “Jack Reacher” and scripting “Edge of Tomorrow”) more than compensates on the written front; his screenplay (based on a story conceived with Drew Pearce) achieves an admirable complexity without sacrificing coherence in the process. On the face of it, “Rogue Nation” is another patchwork of Hitchcockian tropes and James Bondian cliches, as familiar as the recurring strains of Lalo Schifrin’s classic musical theme: Carefully encrypted messages are transmitted, bank-account numbers are copied and deleted, and high-tech explosives are armed and disarmed. Behind the Syndicate lurks a calculating uber-villain (played with understated menace by the protean Sean Harris) deluded enough to confuse mass annihilation with salvation, and even after he’s defeated, the film acknowledges, there will be many others like him waiting in the wings. Everyone is wearing a mask, and not just of the latex variety: As Ethan and Ilsa’s pointed conversations remind us, these agents are professional con artists who must decide anew each day whether they owe their highest allegiance to their cause, their employers, their friends in the field, or the civilians who are always at risk of becoming collateral damage.

A “Mission: Impossible” movie will admittedly never be mistaken for John le Carre, even if this one does feature the marvelous Simon McBurney (a veteran of 2011’s “Tinker, Tailor, Soldier, Spy”) as a high-ranking official whose connections within the British intelligence community run treacherously deep. Still, “Rogue Nation” exudes a knowing sophistication and a winking sense of fun that make it the most philosophically brooding film in the series, acknowledging the soul-crushing futility of so much intelligence work, especially for those who have been smeared and disavowed by their own agency. “I can’t see another way,” Ethan despairs as the story approaches its fatal endgame — one that, he realizes, is utterly unavoidable and perhaps even preordained. And so the characters’ sense of defeat becomes a metaphor for the essentially formulaic nature of the action-thriller, calling into question the viability of a genre of which we’ve already seen countless iterations and will certainly see countless more. Yet the unexpected pleasure of “Rogue Nation” is the way it claws its way to freedom and a sense of renewal: In writing Ethan and his colleagues out of an impossibly tight corner, McQuarrie ingeniously turns both formula and metaphor inside out.

While the most recent “Die Hard” and “Terminator” movies have playfully acknowledged that their once-strapping male stars are well past their physical prime, the “Mission: Impossible” franchise is having none of it. Whatever combination of stunt work and digital trickery was involved (very little, if reports are to be believed), Cruise remains as deft a physical performer as ever, and projects nary a shred of self-consciousness or vanity; he is, no less than Ethan Hunt himself, an incorrigible daredevil and a consummate professional. Ferguson, a Swedish actress best known for TV productions like “The Red Tent” and “The White Queen,” brings a strong, engaging if not particularly enigmatic presence to a series whose female operatives have never been its strong suit; her iffy chemistry with Cruise is kept further at bay by a story that, aside from some occupationally mandated toplessness, remains strictly within PG-13 boundaries.

Baldwin’s blustering, antagonistic CIA man lends the proceedings a welcome punch, while Pegg, previously seen in “Ghost Protocol” as a comic-relief figure with a full arsenal of malfunctioning gadgets, comes fully into his own here as an indispensable and uniquely courageous member of Ethan’s team. Renner and Rhames are rather sidelined by comparison, though they get considerably more screen time than Zhang Jinchu, whose prominently billed, blink-and-you-miss-it performance as a CIA underling feels like a sop to the film’s Asia-based investors, China Movie Channel and Alibaba Pictures Group. The perilous landscape of globalized blockbuster filmmaking is very much its own Syndicate, but at least on the evidence of “Mission: Impossible — Rogue Nation,” this is one series whose identity has yet to be compromised.