Will Smith plays a con man who meets his match in this suave but slight outing from the directors of 'Crazy, Stupid, Love.' 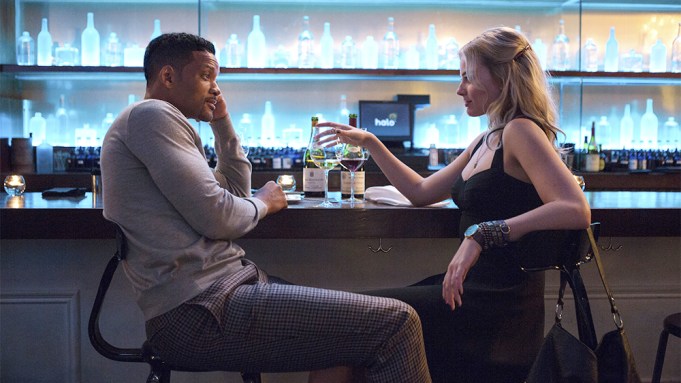 Every movie star is a con artist of sorts, seducing audiences into forking over millions by adopting a character bigger than him- or herself. But what to do when the streak falters? Will Smith made his film debut as a high-society scammer in “Six Degrees of Separation,” and now, a bit more than 21 years later, he’s back at the hustle in “Focus,” a sexy sleight-of-hand caper that feels small-time by the tentpole king’s standards, though a solid opening ought to prove Smith’s ongoing drawing power — and that there is life after the commercial debacle of 2013’s “After Earth.” Lithely directed by the duo responsible for “Crazy, Stupid, Love,” this suave if quick-to-dissipate divertissement shrewdly recasts the star in the George Clooney mold — a good look for the next stage of Smith’s career.

With the rare exception of 2005’s hit “Hitch,” romance hasn’t really been Smith’s bag. Some stars build their entire careers on it, while others hardly ever let love factor into their work (as those developing material for Dwayne Johnson know, “the Rock don’t do romance,” for example). In the two decades since Jerry Bruckheimer got his hooks in him with “Bad Boys,” Smith has mostly led with his swagger, whereas here, he dips into the vulnerability that served him well in riskier outings, such as “The Pursuit of Happyness.” With “Focus,” the whole movie hinges on whether we believe he’s met his match: Can one woman possibly break through and tame him?

From the moment Smith’s Nicky Spurgeon first sets eyes on Jess (“The Wolf of Wall Street” stunner Margot Robbie), he never misses a beat as he quickly sizes up her scam. He notices her boosting watches from married men at the hotel bar, so he’s less than surprised when she lures him upstairs and attempts to pull a classic badger game, in which an accomplice claiming to be her husband bursts in to find them in flagrante delicto. The whole encounter suggests that writer-director duo Glenn Ficarra and John Requa have studied not only how con men operate, but also the best of the genre (having already supplied one of its looniest entries with “I Love You Phillip Morris”), channeling the sultry, smooth-jazz vibe of Steven Soderbergh’s “Out of Sight” from the opening scene.

That’s the tone they’re going for here: Elmore Leonard novel meets Sharper Image catalog. While Smith and Robbie build the dynamic through flirtatious badinage — best exemplified by a touchy-feely lesson in using distraction to separate a mark from his or her valuables — the production team reinforces the mood through a mix of sleek tones and sensual textures. Three for three in the surprise-chemistry department, Ficarra and Requa more or less confirm their ability to generate sizzle from thin air, reteaming with Xavier Grobet, the d.p. who lensed their debut, to give this pic its sultry look.

“Focus” cleanly divides into two parts, and both work best the less one knows about who’s playing whom. Suffice it to say that both Nicky and Jess are operating on more levels than either of them lets on, and that just when things appear to be cooling down, they’re really just heating up. Jess is desperate to rise above fleecing rich guys for their spare change, so she shimmies up to Nicky and tries to work her way onto his crew, which has gathered in New Orleans, to skim the crowds gathered for a championship game (composed of made-up teams in a fictional football league). Nicky allows himself to be seduced, recognizing how the arrangement might serve his own ends, but it catches up with him in the second half, when Jess resurfaces in Buenos Aires, this time on the arm of his rich new boss, racing mogul Rafael Garriga (Rodrigo Santoro), who’s flaunting a fuel-burning formula that everyone else in the industry wants.

Early on, Nicky expressly tells Jess that there’s no such thing as “the big con,” or the kind of operation so lucrative that everyone can retire and live like kings. “We deal in volume,” he explains, setting up a slick montage of pickpocketing — a virtually invisible craft made flagrant for our benefit, if only to emphasize how a skilled swipe relies on teamwork. This demonstration is designed to win us over, but if the filmmakers have convinced us of anything at this point, it’s that they’re working even harder than the characters are to deceive us. For example, there’s the horse race in which Nicky manages to wipe out his winnings, which only we get to see, setting up a gambling problem he might not actually have.

At one point, we see Nicky make the tough decision to step away from the table, as it were, by cutting things off with Jess before she gets too close. When she shows up again, he’s affected in ways we might find hard to believe, if not for the fact that we’re the only audience to his inner anguish, which we must therefore trust to be sincere: Nicky arrived in Buenos Aires with the intention of double-crossing Garriga, but now he seems to be willing to settle for the man’s girl — potentially a far more dangerous prize, given the distrustful looks he gets from Garriga’s surly head of security (Gerald McRaney).

Ficarra and Requa have fun watching Smith’s previously cool character unravel with jealousy, slyly playing against the star’s ego-driven, level-headed persona. It’s a nice change to see Smith unsettled, and Robbie, who wields the upper hand for the better part of the movie, more than holds her own in every scene. Together, they justify the shortcuts the filmmakers take in executing the con, which balloons from a $1 million payday to $27 million without laying the necessary groundwork for all that extra income. The real payoff is the moment it all comes crashing down, quite literally, in a long scene involving a side character, a few shots of tequila, a neck brace and the waste of a perfectly good Ferrari. While not quite the “art” it’s billed to be, if the perfect con is about diverting one’s focus, then this one keeps you distracted ’til the end.