A time-travel premise goes nowhere fast in this latest take on the increasingly tired found-footage genre. 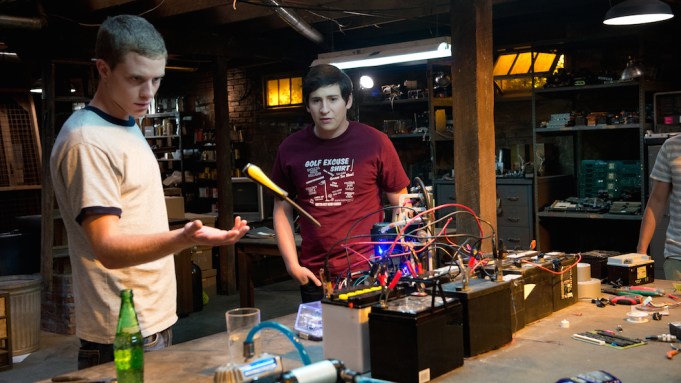 Let’s say you discover a time machine in your basement. Would you use it to go back and stop Hitler, or would you instead make tiny jumps to tweak the quality of your own life — like taking your friends to Lollapalooza, or perfecting the all-important kiss you flubbed the first time around? For the teens in the found-footage time-travel movie “Project Almanac,” the chance to rewrite history is wasted trying to perfect their high-school experience, which naturally leads to unforeseen consequences — for them, at least, although the aftermath will be plenty familiar to butterfly-effect believers — in a film that squanders its potential.

Nearly five years after Paramount announced its Insurge initiative — a plan to generate 10 pics in the ballpark of $100,000 a year, conceived in the wake of the 2007 microbudget phenom “Paranormal Activity” — the studio has finally unveiled its first title (not counting 2012’s shoestring pickup “The Devil Inside”). But the gameplan changed somewhere along the way: In the end, “Project Almanac” came in on a low-eight-figure budget, despite no stars, limited effects and an eye-crossing “my kid could shoot that” homevideo aesthetic, and the ad costs taken to open it will eat up most of the earnings.

Directed by first-timer Dean Israelite, but branded more by its association with producer Michael Bay, who shepherded under the same shroud of secrecy as with Todd Phillips’ wildly successful “Project X,” the end result fails to deliver that renegade one-off’s sense of novelty or excitement — and will likely fall far short of “X’s” $102 million haul, despite hefty cross-promotion from Par partner MTV.

Teen auds already have “Almanac” pegged as a time-travel “Chronicle,” suggesting they’ve been there, done that and are starting to feel the found-footage burnout. Hip to the trend, some creatives have taken to calling this technique “p.o.v. cinema,” given the first-person, selfie-style way audiences are invited to identify with the kids as they document their own adventures. In this case, however, the approach doesn’t feel organic: Sure, modern teens love to film themselves, but these cameras seem to add a layer of distance between the action and the audience. The characters spend too much time worrying about whether they’re capturing the incredible events at hand, rather than allowing themselves to experience things directly, whereas a more traditional approach almost certainly would have felt more immediate.

What “Almanac” does bring to the table is a likable cast of convincing social outcasts, led by the prom-king-worthy Jonny Weston, cast here as nerdy high-school science whiz David Raskin, who desperately hopes to get into MIT. Weston is no more a geek than Logan Lerman was a wallflower (in “Perks” of same), though the young actor plays awkward endearingly enough that we go along. In fact, it would be fair to credit Weston with 90% of the film’s charm, even if his casual relatability later makes it tough to accept the character’s turn to the dark side.

Together with best friends Adam (Allen Evangelista) and Quinn (Sam Lerner), and documented at every step by kid sis Christina (Ginny Gardner), David has an aptitude for invention, but a reckless habit of skipping the safety-test step of the process. While rooting through the attic one day, the siblings stumble across an old videocamera with footage from David’s seventh birthday — footage that, upon closer examination, appears to include a fuzzy glimpse of present-day David in the background. How could this be possible, they wonder, while audiences ask another question entirely: Why is it taking them so long to figure it out?

Eventually, the gang’s curiosity leads them to a trap door in the family’s (astonishingly) untouched basement, where David’s dead dad appears to have stashed a so-called temporal displacement device before his disappearance — a backstory that hints at the possibility of more elaborate twists Jason Harry Pagan and Andrew Deutschman’s script has no intention of exploring. Instead, the film focuses on the minutiae of getting the gizmo to work: trial-and-error attempts involving various power sources, accompanied by such impressive touches as levitating tools and electrostatic side effects (Christina’s hair stands on end, a bulb lights up at David’s touch, etc.).

No one’s more impatient to start time-jumping than David, who sets two ground rules before trying the device on himself. First, the friends will only jump together, and second, they’ll stay within a three-week window, since going any further back risks stranding them in the past for good. Just as they’ve about to leap for the first time, the sexiest girl in school (Sofia Black-D’Elia) stops by the basement and catches the guys scheming, introducing a wild card into their dynamic.

And so the shenanigans begin, as this awkward band of social misfits learns the consequences of time travel on the fly, the most dangerous being what happens when one of them comes into contact with an earlier version of him- or herself (they start to flicker like a glitchy hologram, before canceling each other out altogether). So, what would you do if you had the chance to replay the past? First stop: Win the lottery.

After that, these dull teens run out of ideas pretty fast, apart from a general desire to make themselves more popular at school — which comes with all the cautionary fallout one might expect from an American wish-fulfillment fantasy. Instead of building to a big scheme, David decides to backtrack before things get too far out of hand, and suddenly the movie’s over and the opportunity missed. Evaluated on the concept’s own terms, the script clearly could have used another do-over or two before Israelite and his cast took the plunge.