Michael Mann strains to keep up with the times with this au courant but visually muddled, dramatically clumsy cyberthriller. 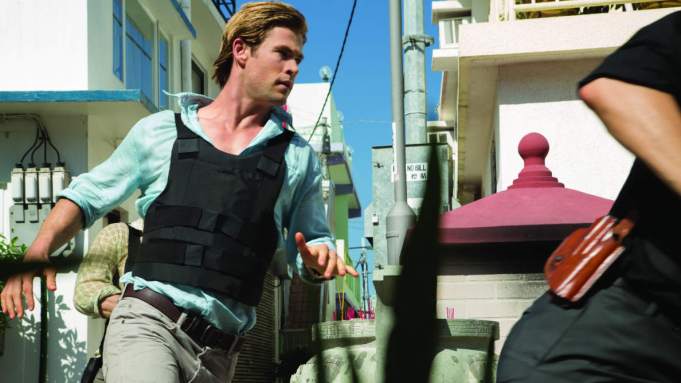 In classic Westerns, the heroes wore white hats, while the villains wore black, making it easy to tell them apart. The world’s gone blurry in Michael Mann’s “Blackhat,” a surprisingly inelegant yet breathlessly up-to-the-minute thriller — as well as a newfangled “Eastern,” strategically set mostly in China, Indonesia and Malaysia — in which the FBI recruits an incarcerated hacker to help thwart an international cyber-terrorist. The weak link in a busy January weekend, Universal’s export-ready offering may not look like much, though powered by criminal stunts that make last month’s Sony breach seem amateur, plus action scenes punchy enough to justify the price of admission, it could hardly be called hackwork.

At his best, Mann’s work explores the thin line that separates good from bad, acknowledging the moral complexities of the modern world. Thematically speaking, the seemingly ripped-from-the-headlines “Blackhat” falls perfectly in line with the ambiguities of “Collateral,” “Heat” and “Miami Vice,” as the film enlists a dangerous mind to work alongside privacy-violating law-enforcement officials. But it lacks both the chemistry and kinetic energy of those earlier films, and what’s more, it looks just plain awful at times, owing to Mann’s proclivity for down-and-dirty digital lensing.

In the 20 years between “Thief” and “Ali,” the visually oriented helmer set a look that other directors have emulated, but these days, we can feel him struggling to keep up with the times. Aesthetics still matter, which is obvious from the opening sequence: a purely cinematic attempt to dramatize a cyber-attack, starting from the macro and then plunging down to the most microscopic level. The Universal logo yields to a view of the Earth from space, featuring the globe aglow with crisscrossing lines of communication; then we zoom in, first to China, then to the Chai Wan Nuclear Power Plant, until the camera passes through a computer terminal to the network of wires, motherboards and pulsing white packets of sinister code.

This no-system-is-safe mood-setter suggests the modern thriller version of Charles and Ray Eames’ conceptual “Powers of Ten” short, culminating in a dramatic plant-core meltdown. But the story goes instantly clumsy from there, jumping between characters and across continents without giving audiences their bearings.

Imprisoned American protagonist Nicholas Hathaway (Australian actor Chris Hemsworth) gets a moderately interesting introduction: We see the “Thor” star knocked around his cell and reprimanded for using a cell phone to break into the facility’s meal-credit system. By contrast, everyone else’s first scenes feel clumsy and forgettable, which is too bad considering the impressive multiethnic range of co-stars — from Chinese agent Chen Dawai (Chinese music star Wang Leehom) to FBI hard-ass Carol Barrett (Viola Davis) — cast in these supporting parts.

What you want from a movie like “Blackhat,” in which the authorities must rely on someone who could potentially be far more dangerous than the perp at large, is a “Silence of the Lambs”-style battle-of-wits dynamic. But there’s never a second in which we believe that Hemsworth is anything but a Boy Scout, the world’s hunkiest hacker and an all-around honorable human being — so much so that the otherwise gritty film pretends that there’s nothing odd about giving him a love interest, Chen Lien (“Lust, Caution’s” Tang Wei), who also happens to be the commanding agent’s sister.

As if to justify Hathaway’s good-guy status, it turns out the reason he’s behind bars has nothing to do with his past computer-related hijinks, but rather some misguided show of chivalry. While that choice serves to make the character more likable, it saps whatever suspense might result from his involvement. A more satisfying screenplay would have given Hathaway some sort of hidden second agenda: plotting his escape, proving his innocence, avenging his captivity.

Apart from a trailer-ready scene in which he pretends not to care that another hacker is using his code to stage nuclear meltdowns and rig commodities markets, Hathaway appears to possess an even greater sense of justice than the agents he’s working for. In other words, he’s not only the whitest actor in a refreshingly diverse cast, but the whitest hat as well. Nothing a dragon tattoo or two wouldn’t fix.

While the character’s motives aren’t nearly as hazy as the premise promised, Mann makes up for that through his choice of technology. Since as far back as “Ali,” the helmer has been smitten with the look of hi-def video cameras, experimenting with the various effects the format makes possible. To eyes that grew up on the rich texture of celluloid — or are accustomed to the relative sharpness of other digital formats — there’s a certain cheapness to the result.

Despite Mann’s meticulous color-coding of scenes, this isn’t the look we’ve come to expect from studio action pictures, but rather from backyard horror movies. He still goes big in the staging, marshaling sequences that feature helicopters, speedboats and exploding cars, but the spectacle itself is captured in slippery, sometimes low-resolution footage, especially apparent during “Blackhat’s” four well-choreographed but otherwise YouTube-quality standoffs.

Maybe that was Mann’s intention. The film is a snarl of contradictions, starting with the discrepancy between Mann’s obsessive demand for realism and the consistently implausible screenplay he developed with first-timer Morgan Davis Foehl (whose prior film credits amount to editing work on Adam Sandler movies). For example, Mann insisted that both Hemsworth and the lead villain (Yorick van Wageningen) learn how to code, though he hardly ever depicts their characters at computer stations. (Those seeking an edgier treatment of the subject ought to track down the hit German cyberthriller “Who Am I,” which is due for an American remake.)

For a film about hacking, it’s downright absurd how seldom computers appear onscreen. Instead, Hathaway’s preferred strategy in nearly every situation is to handle business “IRL” — offline and in-person — while a typically Mannian electronic score sets audiences’ pulses racing. Though it’s the entire pretext for the film, there is virtually no evidence to suggest that the FBI actually needed Hathaway’s assistance as a hacker, but at least he seems a lot more comfortable using weapons than any of the agents he’s working for, which comes in handy near the end.

In time, Hathaway manages to uncover his virtual opponent’s dastardly endgame — a puzzle he and Lien would more logically have figured out hunched over a terminal several continents away. Instead, standing at the would-be ground zero, he turns to his sometimes-hysterical Asian counterpart and speaks of the countless “village people and village dogs” whose lives are in danger. (Oh dear, not the village dogs!) Considering these two outsiders can poke around the site uninterrupted, it’s unclear why a terrorist wouldn’t just back a fertilizer truck up to his target — or, if a hacker can make $74 million by manipulating the market just one time, why he’d go through all the trouble of endangering hundreds of lives to achieve the same effect.

Still, of all the opportunities missed, the most obvious is the notion that we are all vulnerable to this brand of cybercrime today. That’s the tension such a film seems primed to exploit, but the terrorist strikes depicted feel like variations on schemes hatched by yesterday’s Bond villains. It’s a disappointment to finally see Hathaway’s adversary unmasked, and though Mann sets up a climactic “IRL” showdown between the two amid a huge parade in Jakarta’s Papua Square, the film might have been more unsettling had its villain turned out to be a capricious kid — or scarier yet, had he remained a ghost in the machine, a force with no face, nor any hat to speak of.