A disappointing step backwards for the Wachowskis, who lose themselves in an over-designed, underdeveloped 'Star Wars'-style land grab in space. 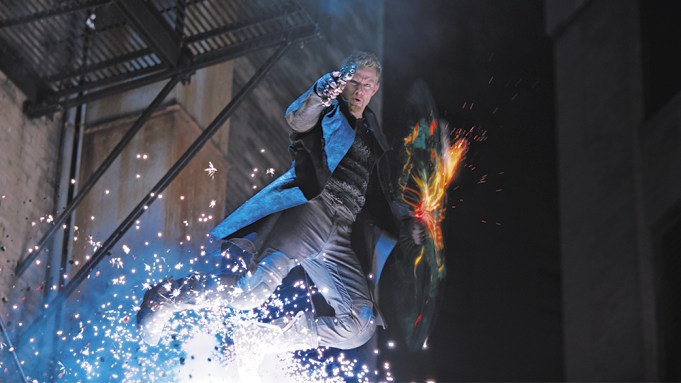 In “Cloud Atlas,” the Wachowskis wildly overreached while tackling the notion of reincarnation via a daring, genre-spanning nonlinear narrative that challenged the very limits of conventional storytelling. Now, with “Jupiter Ascending,” the subject arises once again, albeit in the most banal, been-there-done-that way imaginable: as a garish, “Phantom Menace”-esque space opera in which a lowly Russian cleaning lady (Mila Kunis) is born with DNA identical to that of the most powerful woman in the universe. The movie refers to this statistical improbability as a “recurrence,” which could also describe the painfully familiar feeling we get from watching the Wachowskis fail once again, this time on an unrecoverable $175 million budget, despite whatever boost Imax 3D ticket sales can add.

Originally slated to open on July 25, 2014, the Warner Bros. release slipped back more than six months under the excuse that the production needed more time to finish its elaborate visual effects — which, to be fair, are among the most stunning ever witnessed in a genre known for mind-blowing imagery. But in the meantime, the studio has made little attempt to communicate to audiences what the film is, despite what should be a fairly straightforward marketing pitch: It’s a fairy tale writ on the largest possible scale, embellished with a love story between the oblivious princess Jupiter Jones (Kunis) and the chivalrous skyjacker Caine Wise (Channing Tatum), who rips her out of her dreary existence and reveals her true destiny.

One day, Her Majesty is scrubbing toilets in Chicago hotels; the next she’s being pursued across the galaxy by three greedy intergalactic royals — Balem (Eddie Redmayne), Kalique (Tuppence Middleton) and Titus (Douglas Booth). As the surviving members of the Abrasax dynasty, the trio is threatened by the fact that this less-enlightened human shares their dead mother’s genetic identity, thereby entitling her to claim control of the vast tracts of interspace real estate they all covet. It’s a weird loophole in conventional inheritance law: If the deceased party should happen to be reborn, all property falls to her — the odds of which are about as good as someone finding a Bombay street urchin with fingerprints that match those of the Queen of England.

But what do we know? According to the film’s own mythology, Earthlings are just entering the genetic age. Meanwhile, a long time ago in a galaxy far, far away, an elite clan of humans discovered a way to extend their lives almost indefinitely by extracting a glowing opalescent liquid from other humans, whom they plant on conducive worlds, then wait patiently for millennia until overpopulation exceeds their allotted planet’s ability to sustain life, at which point, the Abrasax landlords swoop in to harvest the entire species. (Where are the Guardians of the Galaxy when you need them?)

Simple cloning didn’t work out so well for the Abrasax rulers, although their over-decorated homes appear to be crawling with new species (subservient lizard officers and short, gangly aliens), as well as several interesting genetic hybrids. Gugu Mbatha-Raw appears with big rodent-like ears, for example, while Tatum’s character turns out to be a Lycantant, a crossbreed of a wolf and a man. Apart from his greenish-blond goatee and ever-so-slightly pointed ears, he doesn’t look all that inhuman, though he claims to have more in common with a dog — which is just fine for Jupiter, who beams, “I love dogs, I’ve always loved dogs,” when the information comes out. Also, Caine once had wings, but they’ve been clipped as punishment for some previous infraction, though he makes do with his floating “surf boots.”

From their lesbian-themed thriller “Bound” to the race-blind karma inquiry “Cloud Atlas,” the Wachowskis have always been heavily politicized in their filmmaking. Here, this elaborate concept of a virtually immortal human elite seeding other civilizations throughout the galaxy functions as a fairly lazy critique of capitalism. In this alternate universe, even genocide runs on the pursuit of profit, and apparently there’s nothing more profitable to be done with entire worlds full of humans than to drain their collective life force — the aftermath of which we see on a deserted world (essentially the Guggenheim Museum Bilbao surrounded by blue sand) where the three siblings survey their most recent harvest. This, too, is a recurring motif in the Wachowskis’ work, recycling “The Matrix’s” massive system of predatory incubators in which the human race lies dormant. But that movie had a terrific villain, whereas neither pretty-boy Booth nor the physically unimposing Redmayne (who sucks in his words like some kind of space vampire) can muster much menace.

While the Wachowskis have always put their greatest emphasis on aesthetics, they allow the visual impulse to get the best of them here, investing so much attention in creating unique fashions, technology, architecture and design that they’ve blinded themselves to the huge logical gaps in their own story. Instead of serving as a lauchpad for big ideas, as their past pics have, “Jupiter Ascending” asks audiences to check their brains at the door and settle for candy-colored riffs on overplayed damsel-in-distress gimmicks. Although clearly conceived as an empowered female heroine, poor Jupiter spends most of the movie being kidnapped and shuffled from one unpleasant situation to another, whether that’s being nearly assassinated during an egg-donating operation or pushed into a marriage with a two-faced Abraxas prince (the geisha-like costume for which trumps even Natalie Portman’s iconic “Star Wars” look).

Those upset by the ontological implications of “Prometheus” are likely to find “Jupiter Ascending’s” working theory of mankind’s origins even less satisfying. The movie spends hardly any time reflecting on the idea that all man’s scientific advances have been redundant (having been first discovered millennia ago), while all his cultural ones are expendable — including movies, which are nothing more than distractions for a race being groomed to fill the bathwater of the rich and powerful. Here, Kalique functions as a sort of sci-fi update on Countess Elizabeth Bathory, who attempted to extend her youth by bathing in the blood of virgins. She appears long enough to rescue Jupiter and explain the rules before disappearing for the remainder of the film. People have a way of doing that in “Jupiter Ascending,” in which characters whose allegiances were never clear are constantly switching sides, before being forgotten altogether (like the blue-haired bounty hunter so determined to kill Caine early on).

It all comes down to a problem of world-building, a skill at which the Wachowskis excelled on “The Matrix.” But their weaknesses were revealed soon after in the “Matrix” sequels, where the sheer scale of the project overwhelmed their ability to focus in on the core narrative. Here, buried under decibels of deafening score (from J.J. Abrams’ favorite composer, Michael Giacchino, working without the solid underlying musical theme of his Pixar and “Star Trek” work), the movie zips from one dazzling setting to another, back and forth between Earth and Jupiter and who knows where else. No sooner have the Wachowskis built it than intergalactic rescue dog Caine comes crashing through walls to tear it all down. Hard to believe, but for all the Abrasax’s technological superiority, it takes just one small hole in the ceiling to bring an entire refinery city crumbling to the ground, and while it all looks quite stunning, the Wachowskis really should have spent that extra six months on development, focusing on the script rather than the visuals. After this debacle, it will be a long time before the kind of recurrence where anyone trusts the duo with a budget anywhere near this scale again.