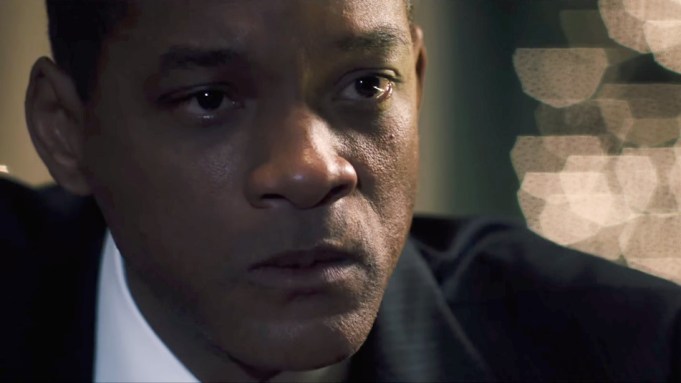 If anyone at Sony Pictures thought the damage done by the hackers to the studio nearly a year ago was firmly behind them, think again.

Emails dredged up by the New York Times on Tuesday of communications among Sony executives discussing the upcoming movie “Concussion” suggests unspecified edits were made to avoid angering the NFL.

“Concussion” tells the true story of Bennet Omalu, a researcher who discovers that repeated head trauma suffered by pro football players led to degenerative brain disease. Played by Will Smith, Omalu is depicted going up against a league bureaucracy unwilling to acknowledge the problem.

Now a movie that once looked poised to raise the question of how badly the NFL would be battered is going to spark the same debate about Sony itself, which issued a statement Wednesday bashing the NYT’s article’s “misleading inferences” and rejecting the notion the studio “softened” the film.

But reviewing these email excerpts, it’s difficult to understand why Sony ever greenlighted “Concussion” in the first place. Execs were seemingly drawn by a classic whistleblower saga pitting a righteous David against a corporate Goliath, yet skittish about the ramifications of incurring the real-life NFL’s wrath.

“We’ll develop messaging with the help of NFL consultant to ensure that we are telling a dramatic story and not kicking the hornet’s nest,” Sony marketing chief Dwight Caines wrote last August. In another email, TriStar Pictures president Hannah Minghella suggests putting the focus on select NFL execs rather than the league itself.

It’s embarrassing stuff. What’s even odder about all these soft-pedaling suggestions is that Sony isn’t known to actually be in business with the NFL in any capacity. The league has a history of intimidating partners like ESPN and PBS that have produced programming deemed unflattering to pro football.

But what’s really strange about the email evidence that the studio was pulling its punches is that the trailer released Monday positions “Concussion” as a hard-hitting movie that doesn’t shy away from its intended target. “You are going to war with a corporation that owns a day of the week,” a character warns Smith’s Omalu. The NFL is mentioned by name and its logo is clearly visible in one frame; that’s exactly the kind of image a studio would whitewash were it truly intimidated.

Of course, the trailer shouldn’t be confused with the movie itself, which may turn out when viewed in its entirety to be less antagonistic than its marketing. But the very fact that the trailer seems to bear down on the NFL like a blitzing linebacker is difficult to square with all the kowtowing in the emails.

What shouldn’t be overlooked is that Sony’s decision to release “Concussion” in late December puts the movie right at the end of the NFL regular season, just prior to the playoffs, a time when the league will be near peak prominence in the mainstream media. It’s a savvy move that would have “Concussion” capitalize on the popularity of the game but will also certainly amplify the controversy bound to be kicked up by the issues the movie will raise. If Sony was looking to duck a fight with the NFL, scheduling “Concussion” around Christmas is not the way to go.

Regardless, the studio is now forced to do damage control, a mode the hackers demonstrated is not exactly the studio’s specialty. Who would have ever thought that, a full year after “The Interview” made its way into theaters, yet another movie risks standing in the shadow of the Sony hack.