Oscar, DGA Voters Have Lots of Choices for 5 Nominees 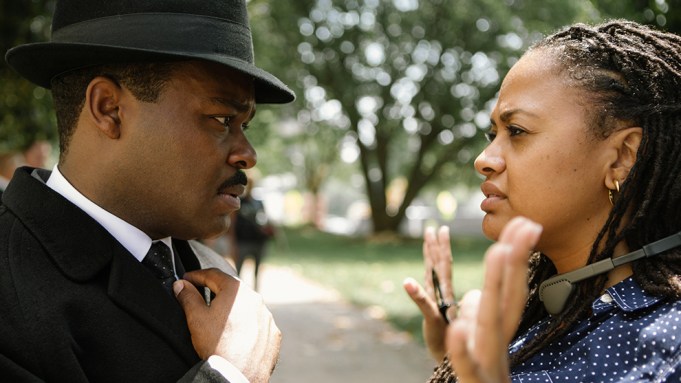 Mention the word “overcrowded” and awards pundits immediately talk about the best-actor race. But the director ranks are just as jam-packed — and offer a more interesting insight into the state of the film biz.

There are at least a dozen individuals whose 2014 efforts are worth remembering; however, there are only five slots, meaning some deserving folks will be disappointed on Jan. 13, when the Directors Guild of America announces nominees, and on Jan. 15, when the Academy unveils the Oscar contenders.

Two women: Ava DuVernay for “Selma” and Angelina Jolie for “Unbroken” mean history could be made this year. Admittedly, two is not a lot, considering there are 323 eligible films. But it is a sign that things are changing.

Relative newcomers: Last year’s director race was dominated by vets, such as Alfonso Cuaron and Martin Scorsese. Not 2014, though. Among the contenders are second films for Damien Chazelle (“Whiplash”) and Jolie; it’s the third film for DuVernay, Bennett Miller (“Foxcatcher”) and James Marsh (“The Theory of Everything”) — actually, his third narrative film, after many docus including Oscar winner “Man on Wire.” It’s the fourth for Morten Tyldum (“The Imitation Game”) and fifth for Alejandro Gonzalez Inarritu (“Birdman”).

Even vets are newbies: Though Wes Anderson (“The Grand Budapest Hotel”) has directed eight films and Richard Linklater (“Boyhood”) 16, this would be the first directing DGA or Oscar nom for either. Many of the others would similarly be first-timers.

Box office not a factor: Christopher Nolan (“Interstellar”) and David Fincher (“Gone Girl”) are among the handful of contenders with a film in the year’s global top 20. Budget and box office aren’t really factors in awards voting, and some of the year’s films will see their biggest B.O. impact in 2015.

Only two front-runners rep true indies: Linklater, with IFC Films’ “Boyhood”; and Tyldum, for Weinstein Co.’s “Imitation Game.” There are plenty from the studios’ specialty divisions, and many films in the mix are from the majors; despite their growing focus on big-scale franchises, studios still have room for “serious” films.

The dark horses: It may seem like an uphill battle for some contenders, but Oscar and DGA voters are always full of surprises. So there could be love for Clint Eastwood (“American Sniper”) and/or Jean-Marc Vallee (“Wild”). Many folks admired Eastwood’s work, and Vallee again shows his skill at working with actors and his below-the-line team after “The Dallas Buyers Club.” Past Oscar contenders who did strong work this year but face an overcrowded field include Peter Jackson (“The Hobbit: The Battle of the Five Armies”), Mike Leigh (“Mr. Turner”) and Rob Marshall (“Into the Woods”).

When the DGA and AMPAS unveil their nominees, there will likely be discrepancies. The two orgs have served up identical nominees only five times in the last 43 years (most recently in 2009). That’s partly because of the makeup of the constituencies: The Academy has 382 voters in the director branch, all from the world of feature films. The DGA has 15,000 voters, including TV directors and first a.d.’s, etc.