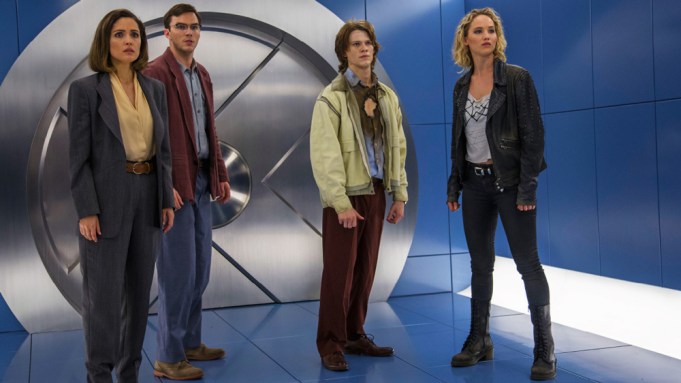 The first trailer for “X-Men: Apocalypse” hit the web on Friday and promised that “only the strong will survive.”

The movie from 20th Century Fox, which ruled yesterday’s Golden Globes nominations, centers around Oscar Isaac’s Apocalypse, the very first mutant, who was once worshipped as a god in ancient Egypt.

The trailer opens with “Game of Thrones” star Sophie Turner witnessing the end of the world in a nightmare. “I could feel all this death,” she says before James McAvoy’s Professor X reassures her that it was just a dream.

Her prophecy comes true when Apocalypse awakens after thousands of years and recruits a team of powerful mutants, including Michael Fassbender’s disheartened Magneto and Olivia Munn’s Psylocke, to cleanse mankind and create a new world order. He then sets his eyes on bringing Professor X to the dark side.

“I’ve been called many things over many lifetimes: Ra, Krishna, Yahweh,” he says in the trailer. “You are all my children and you’re lost because you follow blind leaders, but I am here now. I’m here for you.”

Raven (Jennifer Lawrence) and Professor X (James McAvoy) must lead a team of young X-Men to save mankind from destruction. Aside from the “X-Men: First Class” and “X-Men: Days of Future Past” cast members, the sequel also stars Kodi Smitt-McPhee, Alexandra Shipp, Tye Sheridan, Ben Hardy and Lana Condor. We get a brief glimpse at a bald Professor X at the end of the teaser.

“X-Men: Apocalypse,” directed by Bryan Singer, hits theaters on May 27.