Continue to Variety SKIP AD
You will be redirected back to your article in seconds
Jul 9, 2015 1:47pm PT

Watch: Saoirse Ronan Gets Stuck in a Love Triangle in the ‘Brooklyn’ Trailer 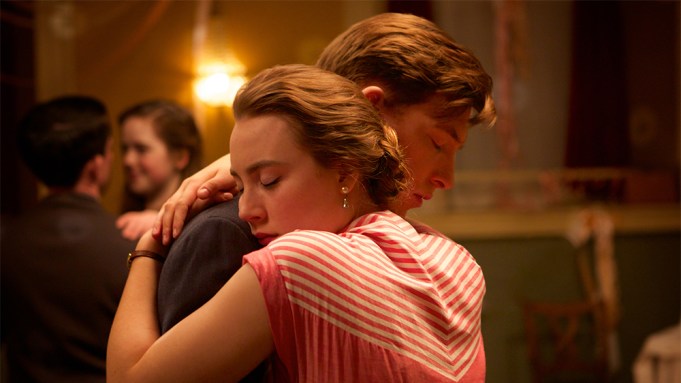 Saoirse Ronan plays a fish out of water in 1950s New York City in the trailer for “Brooklyn.”

In the trailer, young Irish immigrant Eilis Lacey (Ronan) leaves her family and falls in love with a charming Italian-American boy named Tony (Emory Cohen). Lacey learns proper beach etiquette and how to properly twirl spaghetti before being told, “We don’t like Irish people,” at Tony’s family dinner table. In the end, she must choose between her new romantic affair with America and Tony and the offerings of her Irish roots across the ocean.

Nick Hornby penned the screenplay based on the novel of the same name by Colm Toibin. Alan Moloney exec produced the pic, which also stars Domhnall Gleeson, Julie Walters and Jim Broadbent.

Variety‘s review of “Brooklyn” calls it a “robust romantic drama, rich in history and full of emotion.”

“Brooklyn” first premiered at Sundance and is set to bow in November.