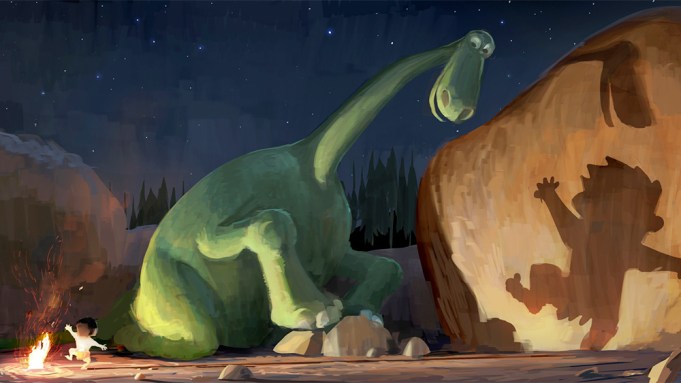 The first teaser for Pixar’s “The Good Dinosaur” imagines a world where the asteroid that wiped out the prehistoric creatures never hit the earth, allowing the species to survive and coexist with humans.

The Disney film centers on a young Apatosaurus named Arlo who sets off on a remarkable journey after a traumatic event unsettles his family, and picks up an unlikely human friend along the way. Directed by Peter Sohn, “The Good Dinosaur” features the vocal talents of Lucas Neff, John Lithgow, Frances McDormand, Bill Hader and Judy Greer.

“This is a boy and a dog story, but the roles are reversed,” Pixar chief creative officer John Lasseter told journalists at the Cannes Film Festival. “Arlo, the dinosaur, is the boy in the story and Spot is the dog” — meaning Arlo stands upright and speaks, while Spot travels on his hands and feet and grunts.

“It’s unlike anything we’ve had before,” Lasseter said. “The level of believability we’re striving for in this film is going to be breathtaking.”

“The Good Dinosaur” bows in theaters on November 25.