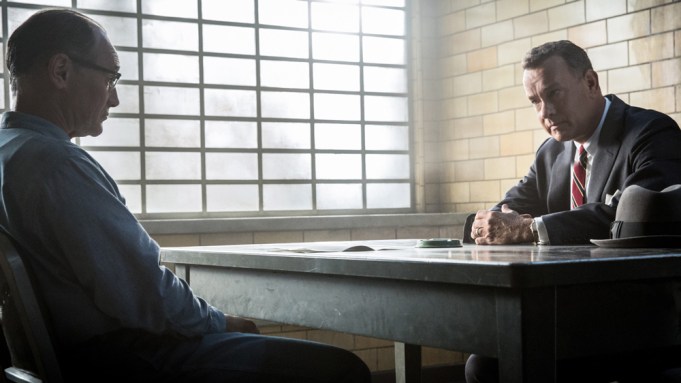 Tom Hanks portrays Brooklyn insurance lawyer James Donovan, recruited to negotiate the swap of a Soviet spy (played by Mark Rylance) for a U.S. spy pilot who’s been shot down with a “head full of classified information.”

“They want you to negotiate so it’s not governments talking,” Hanks’ character is told before being sent to East Berlin.

“We need to have the conversation our governments can’t,” Hanks later tells Russian officials.

The story is based on the real-life swap of spy Rudolf Abel with captured American U-2 pilot Francis Gary Powers in 1962. Spielberg directed and produced the film with Marc Platt and Kristie Macosko Krieger.

The screenplay was written by Joel and Ethan Coen, based on an original script by Matt Charman. The film, which hits theaters on October 16, marks Spielberg’s first directing effort since “Lincoln” in 2011.