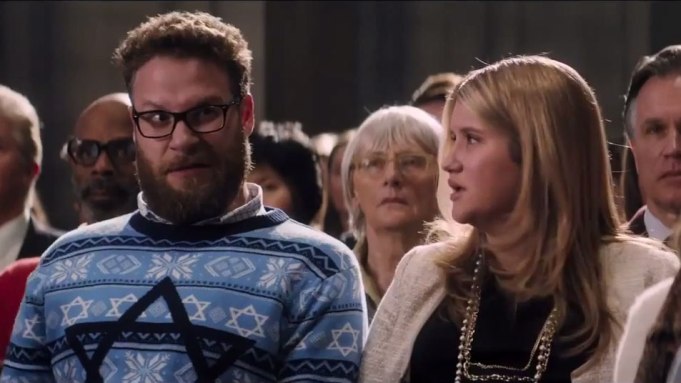 The film, which opens Nov. 25, centers on three longtime friends deciding to party one last time on Christmas Eve to mark the conclusion of their 14-year-old holiday tradition — started due to the death of the mother of Gordon-Leveitt’s character — since Rogen’s character is about to become a father and Mackie’s pro-athlete character is too famous.

Comic chaos ensues when Rogen’s wife, played by Jillian Bell, decides to give her husband magic mushrooms and cocaine. That leads to him barfing in a church while wearing a Star of David sweater and then declaring to the congregation, “We did not kill Jesus!”

Later on at a party, Mindy Kaling praises Miley Cyrus’ “Wrecking Ball,” which provides the soundtrack for the trailer: “You can cry to it, you can run to it, you can party to it.”

“The Night Before” was directed by Jonathan Levine from his own script.