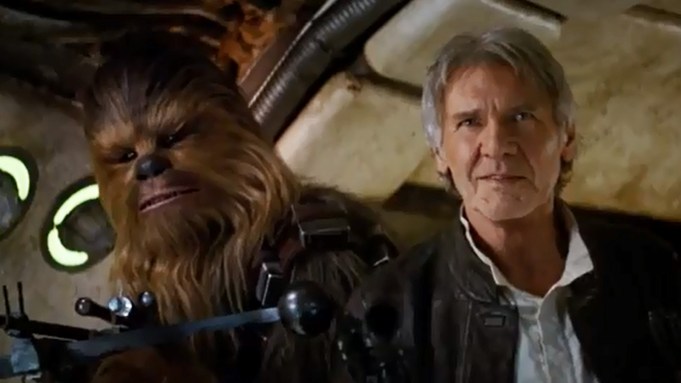 Disney and Lucasfilm have released the second trailer for the highly anticipated “Star Wars: The Force Awakens” at the Star Wars Celebration event in Anaheim, Calif. The new footage gives fans their first glimpse of Harrison Ford’s Han Solo and Peter Mayhew’s Chewbacca from “Episode VII,” as well as a voiceover from Mark Hamill’s Luke Skywalker that echoes an iconic line he spoke in the original trilogy.

While Hamill doesn’t appear in the new footage in full, we see Luke’s robotic arm reaching out for R2-D2, as well as a woman (implied to be Carrie Fisher’s Leia) briefly handling a lightsaber. The teaser also shows more of franchise newcomers John Boyega (who plays Finn), Oscar Isaac (Poe Dameron) and Daisy Ridley (Rey), with Boyega’s and Ridley’s characters joining forces on a desert planet revealed to be called Jakku by director J.J. Abrams at the film’s Celebration panel.

Other shots give us a better look at one of the film’s new Sith villains, Kylo Ren (who wielded the controversial crossguard lightsaber in the first teaser); more of the updated design for the Stormtroopers; and a dizzying battle between the Millennium Falcon and a TIE Fighter through the wreckage of what looks like a fallen Imperial-class Star Destroyer.

The pic bows on Dec. 18. Disney plans on attaching the trailer to “Avengers: Age of Ultron,” which opens on May 1.