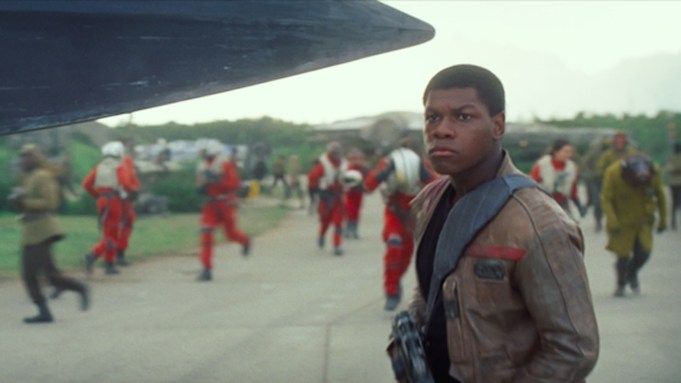 The full trailer for “Star Wars: The Force Awakens” has debuted online, following the promo’s premiere during ESPN’s “Monday Night Football” game between the New York Giants and the Philadelphia Eagles.

The trailer’s release coincides with the launch of ticket sales for the seventh installment in the beloved franchise, which will bow in theaters on Dec. 18. On Sunday, Lucasfilm unveiled the theatrical poster for “The Force Awakens” as part of the countdown to the trailer and ticket release. Despite initial plans for the tickets to go on sale following the trailer’s debut, online ticketers put them on sale almost two hours before halftime, straining many sites, including Fandango and MovieTickets.com, with many users reporting site crashes and error messages as fans rushed to secure their seats.

The new footage opens with Daisy Ridley’s Rey as she scavenges what looks like an old starship — likely the Imperial Star Destroyer seen in the first trailer — before moving on to John Boyega’s Finn as he questions his place in the galaxy. Another shot reveals Adam Driver’s Kylo Ren ominously promising to finish what Darth Vader started. While the trailer is heavy on action and sweeping shots of the Millennium Falcon, it still plays coy with the stars of the original trilogy — Harrison Ford’s Han Solo and Peter Mayhew’s Chewbacca get the most screen time of the returning actors, with only a brief glimpse of Carrie Fisher’s Leia and no full shot of Mark Hamill’s Luke, who is implied to be the cloaked figure seen with R2-D2 in the trailer. Hamill is also notably absent from the film’s poster.

Lucasfilm’s promotional strategy for the hotly anticipated film has been meticulous, beginning with a coordinated launch of the first teaser which debuted in 30 theaters and online in November, followed by a longer teaser trailer that premiered during Star Wars Celebration in April. Other footage, including TV spots, a behind-the-scenes making-of reel and a special Instagram scene have been parceled out over recent months, along with a massive toy launch, but the latest release is believed to be the final theatrical trailer, which is expected to be attached to the latest James Bond installment, “Spectre,” upon its Nov. 6 release.

Rian Johnson is directing “Star Wars: Episode VIII,” which is scheduled for for release on May 26, 2017. Colin Trevorrow’s “Episode IX” is slated for a 2019 release, while a standalone Han Solo origin film, directed by “21 Jump Street” helmers Phil Lord and Chris Miller, will bow in theaters on May 25, 2018. The first standalone film in the franchise, “Star Wars: Rogue One,” will debut on December 16, 2016.