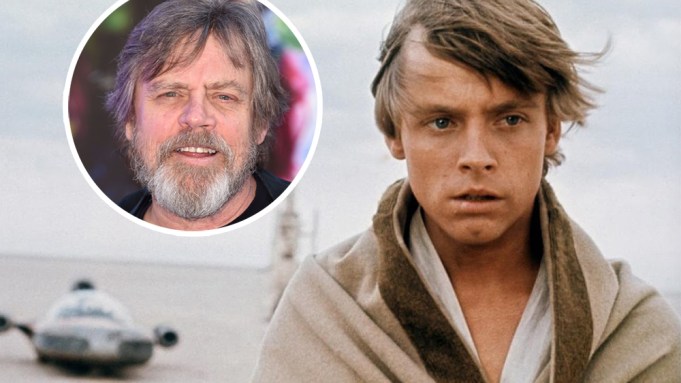 The images are the latest in an expansive promotional push for the hotly-anticipated film, which broke records last month for ticket presales, launched in conjunction with the final trailer.

Much like the previously released theatrical one sheet and all of the trailers, Mark Hamill’s Luke Skywalker is conspicuously absent from the promotional materials (although we may have seen a shot of his robotic hand reaching out for trusty droid R2-D2), an omission that director J.J. Abrams recently told the Associated Press is “no accident.”

Where is Luke and what happened to him? “These are good questions to be asking; I can’t wait for you to find out the answer,” the notoriously cagey director teased.

Luke Skywalker may be the driving force behind the narrative of the upcoming “Star Wars” sequel, in fact. Lucasfilm CEO Kathleen Kennedy previously admitted that she piqued Abrams’ interest in signing on to “The Force Awakens” by posing the director a simple question: “In the context of talking about story and laying out what we were thinking, I said one thing to him: ‘Who is Luke Skywalker?'”

But could that mean a turn to the Dark Side for our humble hero? Kennedy recently told Entertainment Weekly, “The themes and ideas that we all continue to talk about are the themes and ideas that were the inherent in the original movies. We’re looking, obviously, for aspiration, for characters who are conflicted between good and evil, dark and light … George [Lucas] spoke often about that tension in everybody between what’s good and bad. He always felt that it was easier to be bad than good. I’m not sure all people would agree, but I think that that’s always an interesting conflict to explore. So that’s a big part of the themes inside of ‘Episode VII.'”