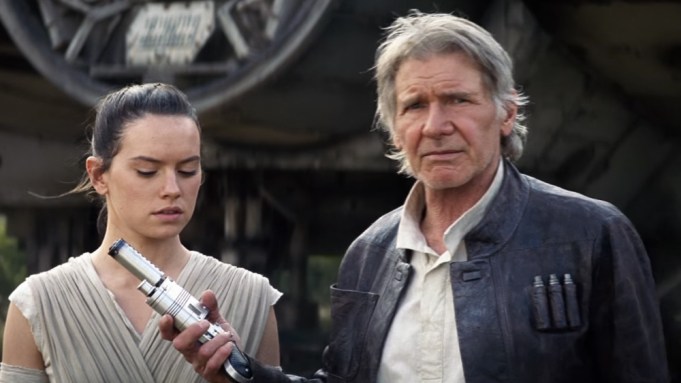 The force is clearly with ShondaLand.

Harrison Ford’s Han Solo hands Rey (played by Daisy Ridley) a pistol/blaster and says, “You might need this.” Han is later shown in a shootout, while Finn (John Boyega) uses Luke Skywalker’s (Mark Hamill) old lightsaber to fight a stormtrooper, who somehow has a weapon that blocks the blade. Skywalker himself is still MIA in this latest trailer.

The new footage also offers a closer look at Finn and Rey’s first meeting. We also see Finn escaping the First Order and Rey entering the Resistance command station, where General Leia (Carrie Fisher, who’s no longer caller “Princess”) and C-3PO are among the assembled. Fisher’s real-life daughter, Billie Lourd, is also in the scene.

The new TV spot includes a portion of the film’s score from composer John Williams, who could earn his 50th Oscar nomination in the original score race.